Çıntar mushrooms are a seasonal delicacy in Turkey. November/December are the months when these mushrooms are found in abundance. They grow around pine trees in forest areas, of which there are many in this region of Turkey! During these months you will find random cars parked up in the trees with people wandering around searching for the wild mushrooms. I’ve actually been foraging for çintar mushrooms in Denizli before too and we managed to fill a big bag, it’s quite satisfying when you find them!

The mushrooms are an orange colour and have quite a meaty texture and taste. The only way I’ve eaten them is cooked on a BBQ, and they are delicious!

According to google, the proper name for these mushrooms is Lactarius deliciosus, also known as Saffron Milk Cap mushrooms.

When I woke up the morning after we arrived in the village and looked out of the window, I won’t lie, I definitely thought ‘what on earth am I doing here?’ – it was the first time I’d seen the place in daylight (at least since I’d visited 3 years ago..) and to someone not used to living this way, it was quite a shock to the system. 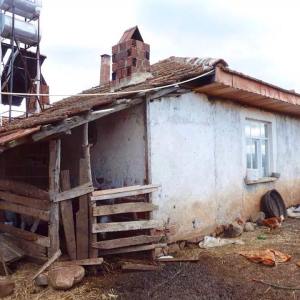 The room we were sleeping in was now freezing as the soba had been turned off all night, so as soon as we woke up we bundled into the living room with the rest of the household and sat around their recently lit soba, there’s something very cosy about the soba, it reminds me of Christmas with everyone sitting around the fire in their pajamas.  We weren’t up for long when Berkay’s aunt walked in and started making breakfast right away, as I mentioned previously she’s kind of taken the role of housekeeper on now that Berkay’s mum is sick.

She came out with a tray of breakfast foods, spicy Turkish sausage (sucuk), tomatoes, olives, boiled eggs and some sort of lentil dish which was lovely to dip the bread in! Of course this was all washed down with a few glasses of Turkish tea. While we were eating Berkay’s brother had a phonecall that the daily village delivery of coal had arrived and said that he and Berkay could go an unload it all for some cash. I could have waited in the house with Berkay’s mum and aunt, but I knew that when Berkay said ‘we’ll only be gone 2 hours’ he was talking Turkish time, and I learnt a long time ago that Turkish time means add on at least 2 hours more to everything they say, so I decided to go with them. I had a quick shower, which was much like having a shower at our own house, no hot water from the solar panels and no electric shower meant it was a boiled water from the stove and a jug job – no complaints from me as I’m definitely used to that by now! 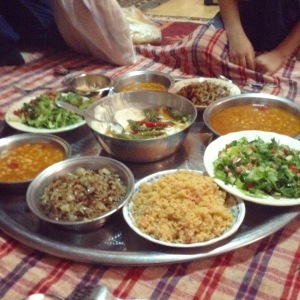 We drove to the village centre and as it was freezing cold outside and the boys had work to do, I sat in the warm car watching them and being nosey at the surroundings. I wanted to have a walk around the town, but I would undoubtedly be the only woman down there, so I thought I’d feel a little uncomfortable and decided against it. Instead I sat in the car with my laptop writing a couple of blog posts. I’d look up every so often and see Berkay pushing a heavy wheelbarrow full of sacks of coal into the warehouse while his brother and a friend were on the truck moving the thousands of sacks into his reach. It definitely looked like hard work, and the fact they were sweating when it was a mere 6 oc outside said it all. They briefly stopped for lunch and we all shared some pide, which was delicious. The boys stunk and were covered in black dust from the coal, but eventually 4 hours after they had started their ‘just two hours’ job (*cough*… Turkish time…) they unloaded the last sack and off the truck drove back to wherever it came from. Berkay got 60tl for his effort, which is very good money for just a few hours work, he’d been working here in Calis recently earning 20tl for a 12 hour day! It’s so typical of Berkay to be working during his little holiday, he hates sitting around doing nothing.

When we arrived back at the village house it was around 2pm and more of Berkay’s family had arrived to visit him, his uncle, aunt, cousins and even second cousins were all there to greet us. Berkay’s other aunt had once again been preparing a meal and came out with a huge tray of food for everyone present. We all gathered on the floor, sat around the tray and tucked in – this time it was salad, kuru fasulye, bulgur rice, dried meat and onion and a huge bowl of garlicky yogurt to dip bread into. After our pide we weren’t really hungry but know they get offended if you decline food, no matter how politely, so we ended up eating some anyway.

After an hour or two of more chatting and cay drinking, the guests left, Berkay’s mum had a nap, his dad was at work, his brother was busy with the animals and we had some time to ourselves. We had a quick look around their garden and farm area behind the family home, I’d been dying to see the animals ever since we arrived. I love animals and love the idea of having a farm, although I’d be rubbish at it as I’d never be able to bring myself to kill them for meat or sell them, I’d get far too attached. Berkay’s family has a lot of animals – sheep, cows, goats, chickens, turkeys and a dog. Berkay’s dad wakes up at 6am every morning to milk the cows and they use the milk for drinking and for making butter. They have a baby cow which is only a week or two old, they still feed it with a bottle! It was so cute and so fluffy, I stepped into the cow shed and managed to stroke it – I love this photo of it trying to lick my hand – what an action shot! They also have one lamb at the moment, just look how in love with it Berkay was. 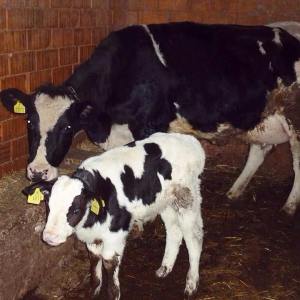 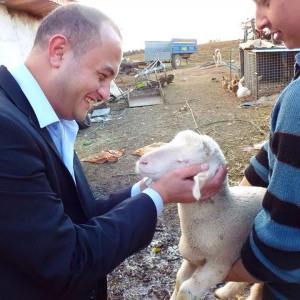 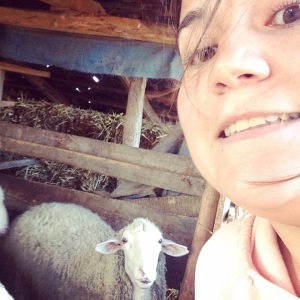 While we were walking around I couldn’t help but think how beautiful and picturesque the scenery was – so much countryside, farms and green hills as far as the eye could see.

Since we had some time to ourselves, Berkay said he wanted to take me for a drive so that he could show me the house he has born in and a few other important places for him around the village. He kept pointing out things his Grandad had made and built, trees Berkay himself had planted as a child with his nan and telling me stories of the things he had done with them. He always speaks highly of his grandparents, they raised him as a baby as his mother and dad abandoned him when he was only 28 days old, he’s still not seen his mother since and knows nothing about her, and although he is on speaking terms with his dad, he definitely had a stronger bond with his grandparents, who have both now passed away, he showed me the cemetery they’re both in too. 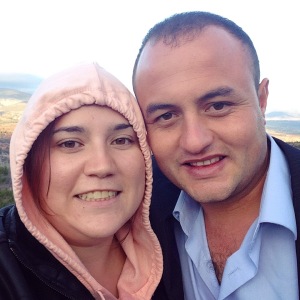 He drove us up to Esentepe just as the sun started to go down and we got out to take a photo of the beautiful scenery – it was pretty to look at but it was freezing cold, I ended up wearing my hoodie and Berkay’s thick leather jacket on top! The sun was just starting to go down but before it did Berkay said he wanted to wander through the trees and try and find some çintar mushrooms – special wild mushrooms that are a seasonal delicacy here in the south west of Turkey. A few minutes after starting searching I heard him shout “Danni, come here, I found one!” he was so excited. 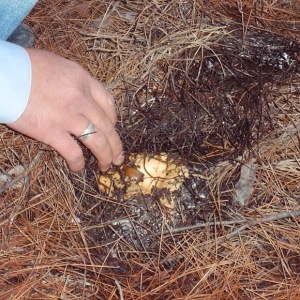 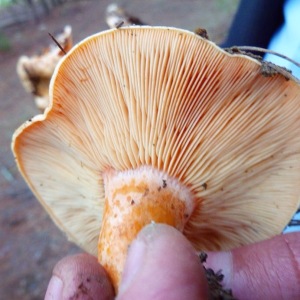 He’s definitely the expert at finding them, he knew how to spot them under a pile of twigs and I was just walking around aimlessly not really knowing what I was looking for… I found a lot of ‘normal’ mushrooms, but no çintar ones, until I spotted a giant orange thing sticking out of the ground.. “look how big this one is…” I said, and then Berkay informed me it was exactly what we were looking for. I was very proud of our little mushroom stash, you’ve heard of the saying “bringing home the bacon”, well we were definitely “bringing home the mushrooms” and we took them all back to Berkay’s family ready to eat on the BBQ the next day. 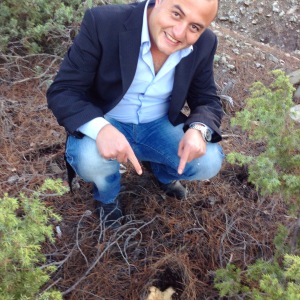 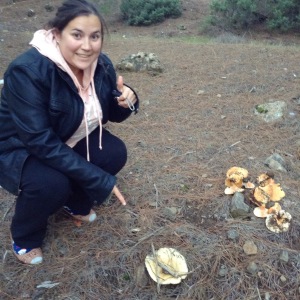 After all the mushroom picking, food eating and tea drinking, we were exhausted and settled back in the house for the evening. I decided to change my outfit to fit in a bit more and put on my comfy ‘village’ flowery baggy pants. We ended up going to Berkay’s aunts house with his brothers and played OKEY, ate more sunflower seeds and drunk more tea… I was starting to think I’d end up looking like a glass of tea if I drank anymore… 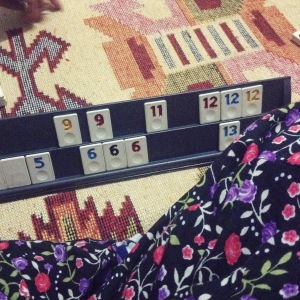 I can’t cook to save my life, but even I can manage these (:
Perfect on the barbeque, yum yum.

>> Rinse the mushrooms and remove the stems.

>>Peel, crush and chop the garlic cloves. Berkay is the expert at cutting things ridiculously small! 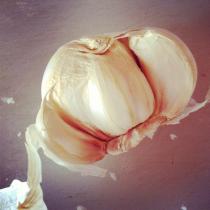 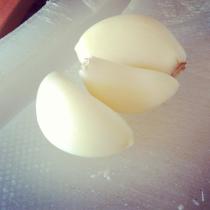 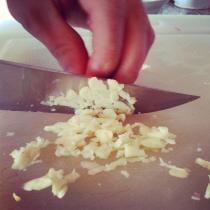 >>Mix in the garlic with the olive oil, add salt if you wish!
Put to one side while the mushrooms are on the BBQ grill. 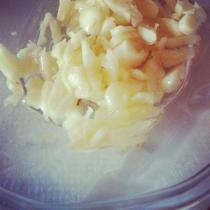 >>After 5-8 minutes and once the mushrooms are soft, spoon the olive oil/garlic mixture in.
Leave to cook for another 5 minutes. 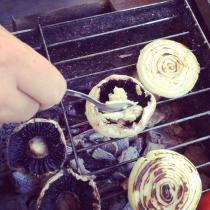 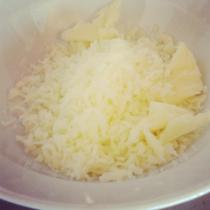 It couldn’t be simpler!  (:
Here’s ours with the rest of our BBQ dinner, köfte (meatballs), Turkish rice, grilled tomato, pepper & onion. We also had the customary loaf of bread on the table of course. (:
Afiyet olsun! 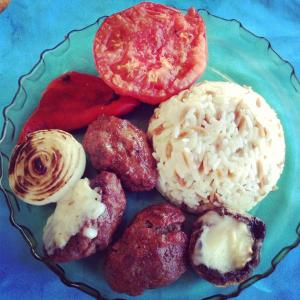