A couple of weeks ago I wrote about how Berkay had travelled to Izmir to sit his English exam. Last Wednesday he got the result – he PASSED!

We are so relieved! Berkay does know good English but it’s not perfect, so I was a little worried, although he said as soon as he came out of the exam he knew he had passed because he found it ‘fine’. Passing was the first step to getting his spouse visa so now we can start to get the ball rolling.

Since then I have been making a list of all the documents we need in order to apply, there are literally hundreds of pieces of paper I need to submit and it’s going to take months to gather all the information needed  – in fact I spent all weekend writing just two letters and trying to plan the evidence we will submit, it’s a lot of work and is keeping me very busy.

We are going to apply in Antalya in October, and if the visa is granted he should be here before Christmas.. If it’s not, well, we’ll cross that bridge when we come to it and re-evaluate things..

Last night I booked my flight out to Fethiye for 8 days – I had to plan it carefully so that I could make the most of my 5 days off work, those are literally the last 5 days of annual leave I have until January – my other 3 trips to Turkey this year has meant I’ve used all the days up. I go the first week of October so Berkay will still be working in the hotel, he usually doesn’t get any days off so I’m hoping his boss will have a heart and let him have a week, or a few days at least. I can’t believe how expensive the flights are at the moment, I paid £300 return, which is a lot considering it won’t be high season then. I did find cheaper flights through Turkish Airlines, and as lovely as my previous two flight experiences with them were, I just do not feel comfortable flying via Istanbul at the moment.

This week marked 6 months since Berkay left the army and honestly I’ve never been more glad. There were scary scenes in Turkey last week as I’m sure my readers will have seen, and if Berkay had been in the army now I’m not sure I would have coped! Thank goodness he’s out and we can start counting down the days until we’re together again.

Yesterday, 8th July, was our 6 year anniversary. Back on 2nd July 2010 I flew to Turkey with my friend and stayed in a small hotel in Calis, Fethiye. Little did I know that during that week I’d meet Berkay, one of the staff at the hotel, towards the end of the holiday we got speaking, went out one night and the rest is history.

Who would have thought that now, 6 years later, we’d be married? Proof that a ‘holiday romance’ can work out!
We have spoken to each other every day since 8th July 2010,  we lived together in Turkey for 3 years, he visited the UK 6 times, we survived 9 months without seeing each other during his 12 month army service and managed with just a 1 minute phonecall as our only contact everyday for a year. We haven’t seen each other since a few days after we got married back in April, but hopefully we’ll be together permanently before the end of the year and then we can start a whole new chapter!

In order to apply for Berkay’s spouse visa to live in the UK, we have to provide a lot of paperwork and proof of our relationship so I have been going through old photos to show as evidence – since they were handy and saved into a folder on my computer I thought I’d share some here, Danni & Berkay through the years! 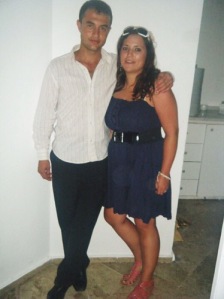 This was the first photo we had together, and the only one for months! I think it was taken right before I left to go back to Dalaman airport. It’s really funny looking back at this photo as when it was taken I never for 1 second thought we’d end up having wedding photos taken together 6 years later! The 2nd photo was taken in October 2010, when I went back to Turkey for a week alone, to get to know Berkay better. Before that week we’d only spent a couple of hours together, but after talking to each other every day for hours on MSN for 3 months, it felt like we’d known each other forever. 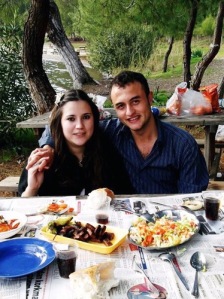 In January 2011 I flew back to Turkey for a week and spent more time with Berkay. This photo was taken at aksazlar koyu in Fethiye, the first time I’d ever been there. Today it’s our favourite spot to go to for a BBQ! The 2nd photo was taken on our 1st anniversary in July 2011, by this point I had been living in Turkey for 2 months having only actually spent 2 full weeks with Berkay before moving. 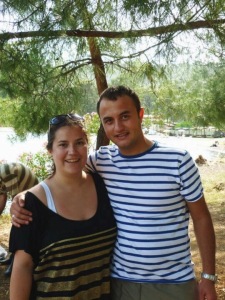 In December 2011, after 2 attempts, Berkay got his visit visa to the UK granted and we went to the UK together for Christmas, followed by another 2 years living in Turkey together.. 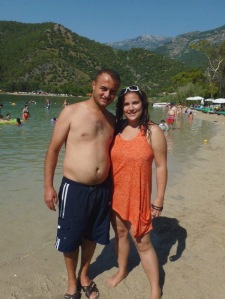 In 2013, I made plans to move back to the UK, but not before a little weekend getaway in Bodrum, where we had some fun dressing up as sultans! 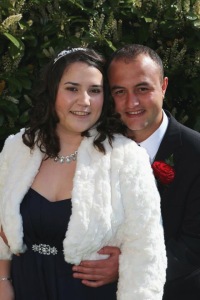 I moved back to England for 8 months, and Berkay came to visit for Christmas and for my mums wedding – it was during this time I realised how hard it was to be apart and how much I didn’t want to live in the UK without him while we still had the choice, so I moved back to Turkey for 6 months in 2014. The 2nd photo is taken on Berkay’s birthday in December 2014, the day before I moved back to England once again.

2015 was without a doubt the most testing year for us, as Berkay had to do his 12 month national service which I ranted, cried and moaned my way through. In April 2015 we were reunited for a week during his army leave and the rest of the year was very tough with Berkay being sent to Diyarbakir and not being able to take any of the remaining leave. This meant I didn’t see him again until January 2016.

After 8 very long months without seeing each other, the longest we’d ever spent apart, I spent 10 days back in Fethiye with Berkay in January. It felt like I’d never been away, and like we’d never been apart. In April 2016, we got married. Unfortunately I had to fly back to the UK just 4 days after… and we haven’t seen each other since.

I’m hoping to go back to visit in September, and then we’ll apply for Berkay’s spouse visa around then. I hope that by the end of this year we will be able to settle, rather than be backwards and forwards between both countries, or having long periods of time apart. The last 6 years certainly haven’t been easy or without obstacles, and it’s so funny looking back on old photos and thinking how different things were back then.

We’re a little older, fatter and bolder, but still just as happy… even though we act like an old married couple most of the time! We have come a long way in 6 years, here’s to the next 60…

For the past month Muslims all over the world have been participating in Ramadan, the Islamic holy month of fasting. After a month of fasting from sunrise to sunset, they celebrate the end of Ramadan with a festival known as ‘Şeker Bayramı’ (sweet/sugar festival) or Eid al-Fitr.

The festival begins at sundown on the last day of Ramadan, which this year is today.  After the call to prayer at sundown, people break their fast for the last time and the celebrations begin.

In Turkey, generally the most important day of the holiday is the first full day, which will be tomorrow, 5th July. Families will wake up early in the morning, get washed, clean and wear new or their best clothes, the men then go to mosque for their Eid prayer. Many will donate money to poor or needy people as an act of charity. The holiday period is seen as a chance to forget any grudges or issues with people and to forgive, forget and move on.  It’s customary for the younger members of the family to visit their elders, neighbours and friends and wish them “İyi Bayramlar”. They greet their elders by kissing their right hand then raise it to their forehead, if you have Turkish relatives you’ll know what I’m talking about! There will have been days of preparation beforehand with houses being thoroughly cleaned, traditional desserts like Baklava being cooked and new clothes purchased.  In the days leading up to bayram the supermarkets are VERY busy with people stocking up on sweets and chocolate to give their visitors, hence the name of the festival literally translates to ‘sugar/sweet holiday’.

Aspects of the festive period reminds me of a cross between Easter and Halloween. Of course they are very different celebrations for very different purposes, but there are similarities – traditionally at Easter children would be given new clothes to wear and obviously there’s the giving of the chocolate eggs. During bayram the children often knock on their neighbours doors and are given sweets and chocolates or even money, similar to Halloween.

How will it affect your holiday to Turkey?
Usually, during the whole 3 days of bayram, government buildings, banks and offices are closed. This year, the public holiday lasts 9 whole days (including weekends) and a lot of official places will be closed for the whole duration. ATM machines are likely to run out of cash – so if you need some, get it as early as possible.  Most of the shops, bars and restaurants in resorts will remain open as they have to make money. You may wish to greet people in shops, hotel staff or waiters with wishes for bayram such as: “Bayramınız kutlu olsun” / “Bayramınız mübarek olsun”– may your holiday be blessed, or “Mutlu Bayramlar” – happy holidays.

It’s normal for the roads to be very busy at this time of year as families go on a mini vacation to resorts or to visit family and friends in other towns and cities, coaches and buses are likely to be full and you may notice that there are a lot more Turkish people and cars in your holiday resort during this time, beaches are busier and hotels are full. It’s advised to avoid travelling if you can, even the small dolmus’ are likely to get very busy, and that’s never fun in this heat. In general, it shouldn’t affect your holiday too much, just be aware of the celebrations going on, you may be offered sweets and it could be considered rude if you decline. The atmosphere in general will be happy, with plenty of excited children running around!

Berkay gets no time off whatsoever during Bayram, in fact it’s quite the opposite, he’s likely to be working harder and longer with more guests staying at the hotel. So really, for him the holiday period will be just like any other day! He did send over a little package with some bayram chocolates (along with baggy pants and one of our wedding albums) for me though, so I will enjoy eating those and doing my part to celebrate 😉