When we booked to go to Istanbul we were both really excited about trying it’s famous street food – top of the list thanks to friend recommendations, was the Islak Burger – I had seen people post about it online and it had never really looked appealing to me but I’m open to new things so I stuck it on the list!

Once unique to Taksim square, islak burgers have started to spread across to other areas, and when Berkay went back to Fethiye after our trip he even managed to find somewhere there selling them! They aren’t really as popular elsewhere though, and to get the authentic experience, you have to go to the home of the islak burger – the top of Istiklal street, on the corner of Taksim Square. 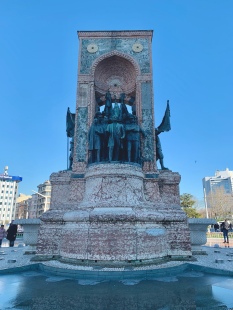 Taksim square itself is well known for being the central point of demonstrations, riots and protests but when we went, on a sunny, cold Saturday lunchtime it was peaceful and relatively empty. There is a monument in the middle of the square, made in 1928, commemorating the founders of the Republic of Turkey – showing Ataturk in his military uniform on one side, representing the war of independence, and in his ‘normal’ clothes on the other side, representing the modern Turkish Republic.

By night, the area is bustling with thousands of people frequenting its many restaurants, bars and nightclubs – at the end of a good night, they all need something to soak up the alcohol and that’s where the islak burger comes in!

‘Islak’ is the Turkish word for ‘wet’, so as the name suggests, it is essentially a soggy burger.  A thin, small beef patty, bun and a special garlicky tomato sauce is all they consist of. Once the burgers are cooked and made up, they are put in a glass box on a metal plate – underneath the plate boiling water creates steam which rises up and creates condensation – basically the burgers are treated to their own little sweaty Turkish Hammam experience! It may not sound the most appealing in the cold light of day, but after a heavy night out, you can imagine the appeal! 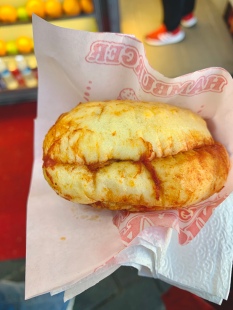 As we were in the area at lunchtime, I had my burger earlier in the day than most people! At 5tl each, I can see why people are tempted to have more than one! Berkay didn’t fancy it so he had a doner instead from the same little cafe.

If you get the chance, you should definitely try an Islak burger, don’t be put off by the fact it looks soggy – it’s delicious, especially the way the sauce is soaked into the bread! 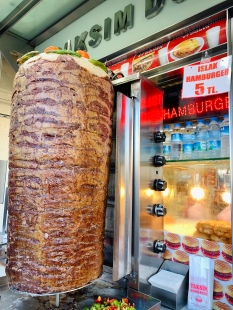 Lahmacun is a very thin round flatbread. The dough is rolled thin and topped with a minced meat mixture – lamb or beef mixed with very finely chopped tomatoes, onions, parsley and spices.

It’s served with salad and lemon. You squeeze the lemon on to the Lahmacun, put some salad on it then roll it up and eat it! So delicious, and because it’s so thin it’s not too unhealthy!

Gözleme is a popular street food in Turkey, marketed in holiday resorts as ‘pancakes’ even though they aren’t really pancakes at all, they’re more of a flat bread. It’s made with flour, water and salt, which forms a basic pastry dough. The dough is rolled very thinly on a special low round table, then filled, folded and cooked on a metal plate. Traditional fillings are savoury – mincemeat, parsley and onion, cheese and spinach or potato and onion etc, but in some areas you will find sweet flavours too – lemon and sugar, nutella and banana, etc, flavours which have been highly influenced by tourist crowds!

My favourite is mincemeat and potato, and our favourite place go for one is the Korkmaz family’s stall in the Fethiye area weekly markets! 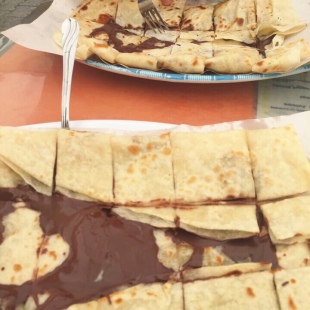 Kokoreç is a popular street food in Turkey – one that I’ve not yet been brave enough to try and I don’t think I ever will!

Kokoreç is made from sheep intestines. The intestines are cleaned then packed onto a large skewer and cooked horizontally over a coal fire, giving it a unique taste. The smell of it cooking is very strong and puts me off even more!

After it is cooked, it is carved off and finely chopped up into pieces then squished in between a half or quarter loaf of bread and eaten like a hot sandwich. Ayran is usually the drink which accompanies this feast! 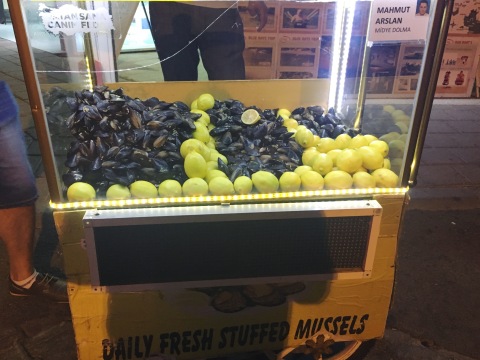 Midye Dolma, or stuffed mussels, are a popular street food in Turkey, sold by vendors from carts along the streets and beaches in lots of cities and towns!

The mussels are cooked and stuffed with rice and herbs. You gently pull the top shell off, squeeze some fresh lemon juice over the mussel and rice mixture, and use the top shell like spoon to scoop it out. I’ll be honest, I’ve never tried them as the thought of mussels just puts me off – but it does look good with all the rice stuffed inside.

They’re cheap, around 50 kurus – 1tl each depending on size, so it’s definitely worth a try. Berkay always goes to the same seller, just across the bridge by the water taxi’s in Calis. 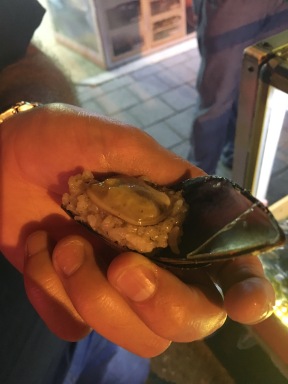 One of my favourite, quick, simple and most importantly – cheap, lunchtime snacks in Turkey is tost.

Not to be confused with ‘normal’ toast – it’s a big, Turkish bread sliced down the middle, stuffed with delicious fillings, pressed and served with a side of spicy, hot pickles. Yum.

The fillings are pretty basic, the most popular is a mixed tost, or “karışık tost” in Turkish, which is a toastie with cheese, sucuk (spicy Turkish sausage) and usually tomato too. I often have this, although my favourite is just a plain, simple cheese and tomato one. There aren’t really very many more variations to the fillings, although whilst in Berkay’s village he had one with scrambled egg, sucuk and cheese in, an odd mixture which tasted surprisingly good.

I love the simpleness of tost so much we used to always make our own at home, but you really can’t beat the way they’re made in cafe’s under a proper, heavy iron press instead of the usual toastie machines. The only downside to how delicious they are, is how unhealthy they are, it’s a bit of a carb overload, eating half a turkish bread in one sitting, and the bread is usually covered in butter on the outside too so it can be rather greasy. Delightful though! 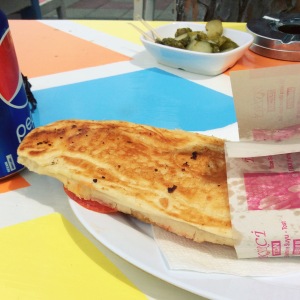 The best cafe serving tost like this in Fethiye is İksirci Tezcan. It’s a small cafe (well, more of a large hut really) on the corner of Fethiye harbour, next to the blue culture centre on the main town square. You can’t miss it, it sits under a shady tree and has pretty, very traditonal low tables and chairs, painted in bright, vivid colours. It’s very popular with locals and often at lunchtime you’ll struggle to find an empty seat amongst the many school children who flock their during their break. It’s almost famous in Fethiye, ask a local or expat about the ‘toastie place’ and they’ll know where you mean! 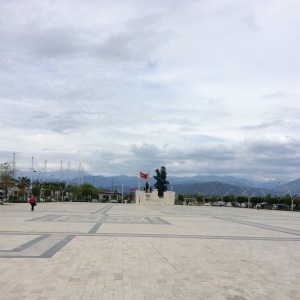 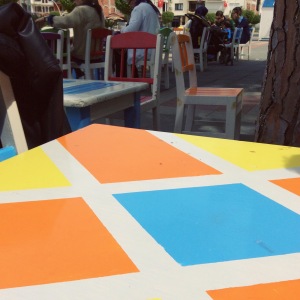 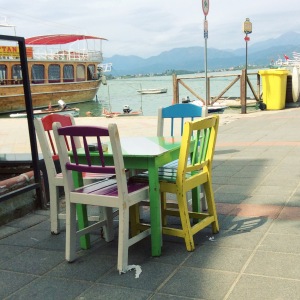 Tost is the only food on the menu here, along with the usual soft drinks, water or their other speciality – freshly squeezed fruit juice, usually orange or pomegranate but it varies depending which fruit is in season. Don’t be put off by the simplicity of the menu though, the toasties here are all amazing.

It’s a good place to sit and people watch as locals and tourists wander past, boats sail in and out of the harbour and street animals play (I shared my tost with a cat!) 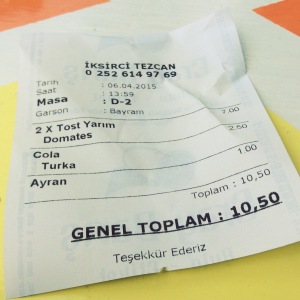 The best thing of all about this cafe is how cheap it is. This was our bill, 10.50tl for 2 mixed tost, a can of cola and an ayran.. at today’s rate this is just over £2.60!
Whether you’re on a budget or not, it’s a fantastic price and a fantastic place to spend half an hour watching the world go by, and you’ll be able to tick ‘tost’ off the ‘Turkish street food to try’ list.