This post is long overdue! 10 days ago we went on a boat trip to the islands around Fethiye. We went along for free with one of the tour groups that visit the hotel Berkay works in – the perks of the job!

The tour group we went with is calls ETS, they go traveling around on excursions from Istanbul and stay in the hotel for 3-4 days, using it as a base while they see the sites of the surrounding areas. We hopped on their coach and headed to Fethiye where we boarded the boat. 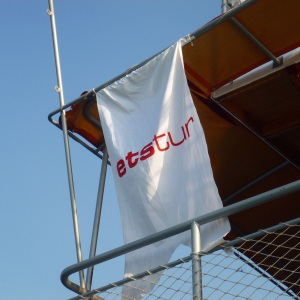 The boat’s name was Grand Baris. We set off around 10.30 and went on a different route to most of the other ’12 islands’ trips, which I quite liked, although we seemed to be sailing forever until our first stop, it must have been over an hour.

The first stop was called Olive Island and was near Gocek I think, we had a swim and stopped there for 45 minutes. It was all going well until my foot touched a sea urchin, those things really hurt. I didn’t even step on it, just brushed it with my foot and it hurt for the entire day! I could see a really tiny black dot which I removed, but my foot felt like it had painful pins and needles until the following day – it was so weird, thank goodness I didn’t step on one completely and get the entire spike embedded in my foot, because that would definitely have ruined our day! 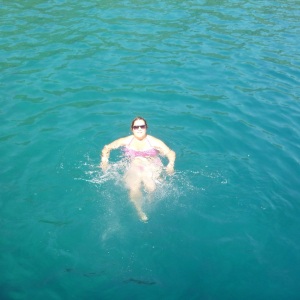 After that, we moved onto the next stop, I’ve forgotten the name but it was lovely there, turquoise water and really pretty. This is where lunch was served. Everyone else on the boat had to pay 15tl for their dinner (I assume because they didn’t pay for the boat trip individually, it was just part of the tour group’s excursions) but we got it for free as we knew them. It was fish, chicken or meatballs with spaghetti, salad and bread. It was a big plate full too, I couldn’t eat all mine, but it was lovely. I found the price of the drinks/food on board more expensive than usual. We had a small glass of Turkish tea which were 2tl each, and I noticed the 5tl Cola and Fanta were smaller glass bottles, rather than 33 cl cans. We also paid 5tl for a tiny plate of about 20 chips… I know we can’t really complain as we got everything else for free, but everyone else who were paying customers still had to pay those prices. 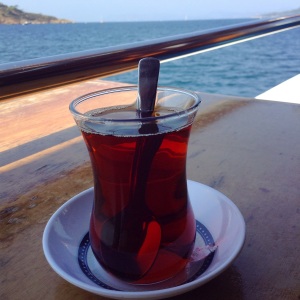 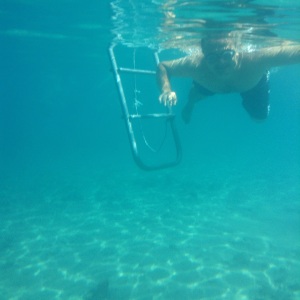 After another swim, the next stop was Flat Island. It was a lot busier here but really beautiful. We got off the island and had a walk around, it looks even better from photos above (google search ‘flat island fethiye’ to see some!). The flat part of the island is shaped almost like a number ‘6’ with a calm, shallow area of water in the middle which you can walk through. We walked along the flat strip until we reached the hill and then turned back, it was so hot we didn’t fancy hill climbing! There were some ducks and chickens present on the island hiding in the shade of the bushes – cute. After another quick swim we got back on the boat and headed off to our last stop – Red Island. 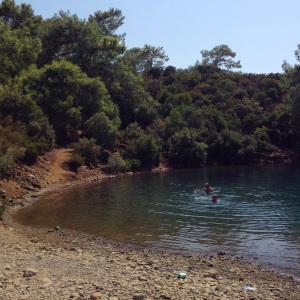 Red Island is the name of the island you can see from Calis and which forms the backdrop of most of my sunset photos! Berkay had had no sleep and had been working all night, so he was napping on the boat, but I went for a swim and took my goggles so I could look for some fish. The boat moored near a corner of the island and I was able to swim to it, there were alot of beautiful fish there, I wish I’d taken my iPod in with me to get some good underwater photos, but I forgot! I’m so glad I took my goggles, because towards the side of the island the water became shallow and I could see and feel the rocks underneath – I peeked through my goggles to see if it was safe to step down and there were so many black, spikey sea urchins waiting for my feet… Definitely learned my lesson the first time and kept my feet firmly off the ground! More boats starting arriving at the island so I swam back towards ours and after 45 minutes they pulled the anchor up and set off back towards Fethiye. 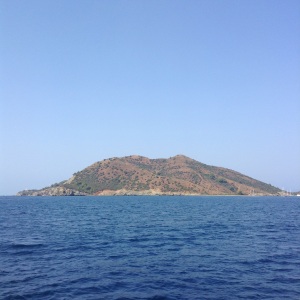 This is always my favourite part of the journey, it was around 5pm so the sun wasn’t directly overhead, making it slightly cooler. I love sitting at the back of the boat with my feet dangling in the water watching people fishing – they caught 2 fish and a starfish – Berkay was jealous, wishing he had bought his fishing rod! The sight as you come into Fethiye marina is beautiful, with the mountains and rock tombs in full view – lovely. 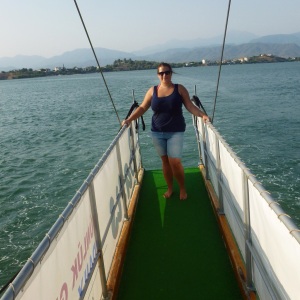 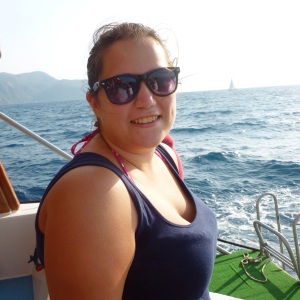 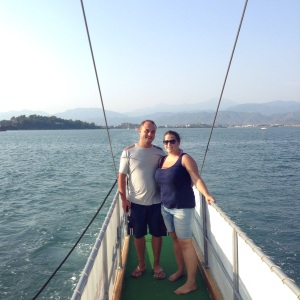 The boat itself was nice, clean and well-kept. The women’s toilets were large, clean and well-lit but Berkay said the men’s weren’t so nice – so much so that he actually used the women’s one instead! The staff were really friendly and it was a good day out, but we probably wouldn’t chose to use this boat again ourselves, we preferred the one we were on back in July. (click HERE to read the post about that trip)

Also, I always cringe when British people complain about the lack of fellow Brits in their hotel or on boat trips etc, we are in Turkey afterall… but there was one small family of English people on the boat who booked separately to the huge (over 100 people) entirely Turkish tour group that we went with and I can understand that they may have felt a little awkward mixed in amongst them. I do wonder if they were informed when they booked that a large tour group was booked on the boat for the same day? That being said, the staff made sure everything was announced in Turkish and English and were equally as welcoming to both groups of people from what I saw. 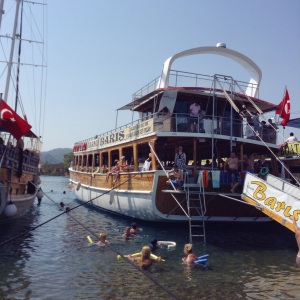 We had a great day and I’m grateful we got the opportunity to go for free (apart from extras like drinks). I recommend the boat, we had nothing but a good experience, but I would suggest making sure there are no large tour group bookings on the day you plan to go if that bothers you.

I just love being at sea, perhaps I should have been a pirate!

I’m feeling very proud right now, even if I do say so myself! 100,000 views in less than 7 months. I can’t believe it, I honestly just can’t believe that so many people care about what I have to say, or are remotely interested. My blog has become more of a personal diary for me now, although I do still try to do serious or helpful posts like “10 untrue stereotypes”, “worst things about living in Turkey” and “holiday fling or the real thing?” as these types of posts are always more popular. I do like to post what I’ve been doing, and the simple day to day stuff as it’s a good record to look back on. I often sit and look back at my blogs and see what I was doing 5 months ago, 6 months ago… It’s amazing the things you forget and how a few simple words and photos can bring all the memories flooding back, whether it be good or bad.

Nobody ever cares what I say normally, I’m a girl of few words. I always say it, but it’s true, I’m such a shy person in ‘real life’ and my blog is a way of letting it all out.

I’m amazed so many people continue to read, the same few people comment on every single post, which is lovely. I really feel connected to people, it’s funny how strangers sometimes can be more supportive than people you’ve known all your life. I’m grateful for everyone who reads, and anyone who leaves comments, even if their words are not always what I want to hear. Just knowing people take time out of their day to read things that I am writing is an amazing feeling. I really feel like I’ve made friends through this blog. I’ve even had people offer to send money, to help Berkay, and Boncuk, and other people offering to bring biscuits and treats out to Berkay when they visit Fethiye, my faith in humanity has been restored, there are some really lovely people out there and I’m so thankful I’ve got to know them through doing this.

I’m so grateful for every single person who clicks on my blog, whether they read one post, every post, or just a few lines. Thank you all so much.

Back in January I posted about reaching 70,000 and what an achievement that was, and done a mini giveaway, which people seemed to like the idea of. I want to do something similiar this time, but I have no idea what to giveaway or what else I could do?

If you have any ideas, let me know!

Thank you all again, especially the Facebook group Turkey – the Good, the Bad and the Ugly, as I’m pretty sure at least 90,000 of these views came from there. ❤