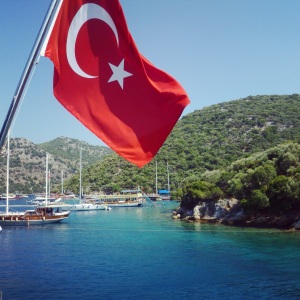 We had planned to join a tour group from Berkay’s hotel and go on a free boat trip on Tuesday, but Berkay had to spend the day in his hometown in Denizli as a member of his family died suddenly, so we missed it. Instead, we went to Fethiye on Wednesday and booked a boat trip ourselves. We spent ages wandering around the marina trying to chose one, some were smaller and more expensive, others were cheaper but the food on offer wasn’t as good etc. Eventually we settled on one of the biggest boats in the marina area, Hanedan 2. I’d never been on a boat that big before, it holds up to 380 people at maximum capacity which is a lot! I usually prefer the smaller, more personal boats but they are often more expensive. The trip was advertised at 35tl including pick up and drop off’s, but we decided to make our own way to Fethiye and back and got the price down to 30tl each, which is around £8.50 each – a good deal I think.

We got to Fethiye at 10.15am, after a quick stop off at the fishing shop so that Berkay could buy some bait – he’s got his own rod and used to go fishing for his dinner most days in the winter.  I was pleasantly suprised at how empty the boat was – there were around 70 people on board in total but it was so large it didn’t seem like there were that many at all.  I was worried we wouldn’t be able to get a sun cushion on the top deck but we did manage to grab the last two – obviously they do not have anywhere near enough for the maximum capacity of people. While we were grabbing our spaces Berkay realised that four guests from the hotel he works at were also on board – they’re Turkish and he’s known them for years, they return to the hotel every year and have become good friends of his, what a coincidence that we ended up on the same boat! 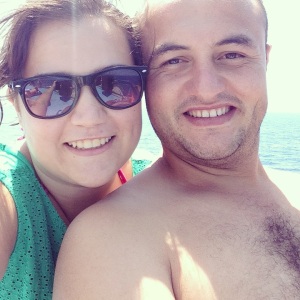 At 10.30am the engine started, and the boat headed out of the marina, along with many more others – it was quite funny to see boats of all shapes and sizes headed off in the same direction towards the islands. 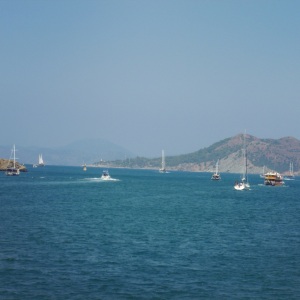 The boat itself was really nice, although it could do with a repaint. The bottom of the boat was entirely shaded with lots of tables to sit at and a bar in the middle. Underneath were the toilets which were actually a lot nicer than any boat toilets I’d come across in the past – 6 individual cubicals, one shower and 3 changing rooms for the girls, and the same I assume for the boys. The top deck of the boat was mainly open and in direct sunlight, with lots of soft sun cushions to lay on. The best part about the boat for me was the built in water slide  – it ran through the whole boat and into the sea – it was great fun. There was music playing while sailing but it wasn’t too loud and it certainly wasn’t a ‘party boat’.

There was a man walking around the boat dressed up like a pirate with his pet parrot – weird. He went up to random unsuspecting sunbathers and put this parrot on their feet, hands, head… if he had come near me I would have jumped out of my skin! It was a beautiful parrot and really well behaved, but I’m not a bird fan, when he started flapping his wings I couldn’t even watch, it made me go all cold, eugh. I did want to have a photo done with it, but after a while he disappeared downstairs into the cabin and I didn’t see him again. There was a photographer walking around the boat taking photos of everyone, sunbathing, jumping in the sea, etc, but we know from experience that these photos are very expensive – they charge around 50tl for a copy of the CD of your photos – they were good quality, but not worth it for us. If you were worried about taking a camera on board and leaving it there whilst you were swimming etc, and felt more comfortable with having someone else take your photos instead it’s a good idea, I guess. 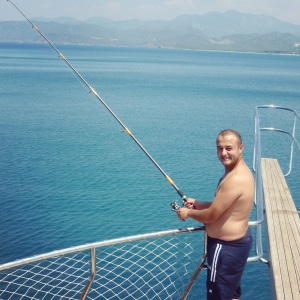 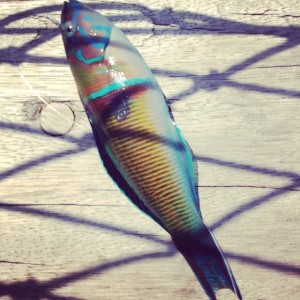 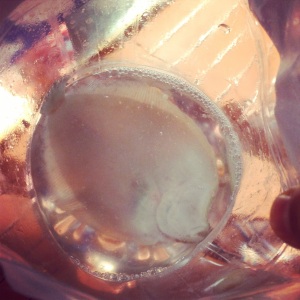 We stopped off at an island for 45 minutes before lunch and Berkay done some fishing, then we both went in for a swim – the water was fairly warm and so calm.  He managed to catch a couple of fish – the first was a really pretty multi-coloured fish, which he threw back in, and the second was some kind of flat fish which we planned to take home to eat. On later inspection and confirmation from the man at the fish market, we realised that it didn’t have much meat on it and wouldn’t be worth it, so we took it home, cooked it and gave it to our dog instead, at least it wasn’t wasted!

After the first stop, we sailed for another 35 minutes and done some sunbathing (resulting in sunburn, ouch!). It was then time to make another stop at another island and have some lunch. Lunch was included in the ticket price, but all drinks and other snacks were extra.  We were all asked when boarding what we wanted for lunch: fish, kofte or chicken, and given little cards with our choice on. The staff came around the tables and asked for our cards which they exchanged for a plate of food – I’d have prefered an open buffet with more choices, but the food was nice regardless. It consisted of our choice of meat, pasta, salad and a bread roll, followed by watermelon.  After letting our food go down for a while, I had another quick swim, and Berkay carried on fishing. 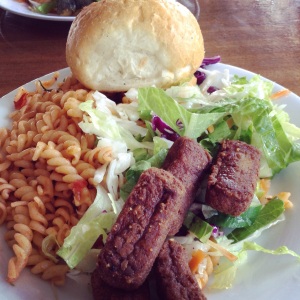 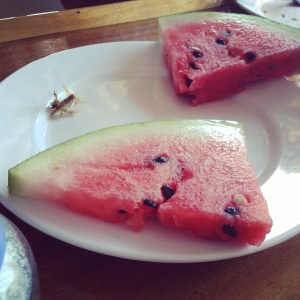 An hour later, it was time to sail to our next stop – Pig Island. By this point I was finally feeling brave enough to try out the waterslide and was so glad I did because it was great fun! You can’t tell from the photos, but the first part of the slide was a really steep drop, I don’t think my bum even touched the slide it was like free-falling! Then it leveled out and went through to the other side of the boat and ended up splashing into the sea, I loved it! The photos of me tying it out are pretty amusing, check out the goggles, oh the joys of wearing contact lenses! I went on this slide about 30 times in total, Berkay was fishing and I was bored so I just kept going down the slide, swimming to the steps, climbing back up and going again – such a big kid!

For the braver people, there was a step on the top deck that you could dive or jump off from – it was terrifying, it must have been around 25-30ft high. I’d jumped off one on a smaller boat before, but this was just too high, I didn’t even attempt it. Berkay dived from it though! I couldn’t even bring myself to jump in from the lowest deck – Berkay got a photo of me attempting it, I was holding my nose and about to jump off but just couldn’t. It was only around 10ft, what a wuss!

I can’t remember if we made another one, or two stops after that, but the final stop was rabbit Island, appropriately named because there are hundreds of rabbits resident there, if you’re lucky you can sometimes see them all come out when the boats leave them some leftover salad – cute. We didn’t see any this time though. Berkay was asleep at this point as he’d been at work all night and was tired, so I spent most of the time alone. The boat had anchored close enough that we could walk off the ramp onto the island and I went exploring on my own – it was really pretty and so peaceful as there were no other boats around. 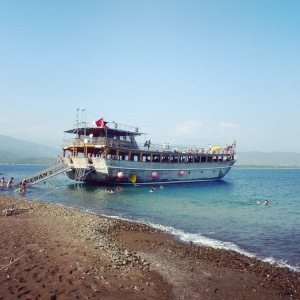 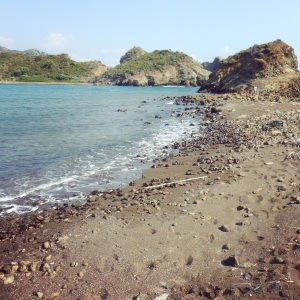 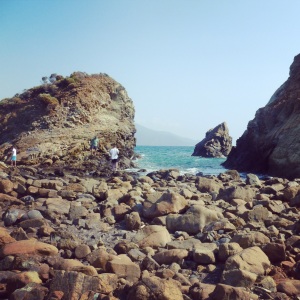 After stopping there for around 45minutes and going down the slide a few more times, it was time to head back to Fethiye. Berkay was asleep in the shade on the lower deck and I’d had enough of the sun so I sat down there and joined him. We got back to Fethiye around  6.20pm, so it was a whole 8 hours we had on the boat – but it always goes so quickly!

I had a really lovely day, I just love being out at sea, it’s so relaxing, I definitely have sea legs! I love the swaying of the boat and all the beautiful scenery, there are so many beautiful islands and bays around the area. I’d go on a boat trip every day if I could! Just look how beautiful and calm the sea is? Nature at it’s finest. 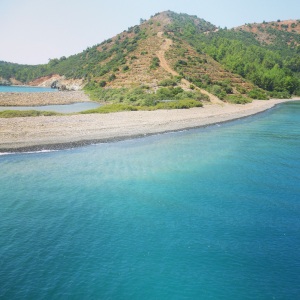 If anyone is in the area and wants to check out the Hanedan 2 boat, you can visit it’s website here, or pay it a visit along the marina, just past Address restaurant in Fethiye.