So, I’ve been here in Turkey for 5 weeks now, where on earth has the time gone?

It’s been a while since I done a personal thoughts & feelings post, I’ve been focusing more on writing about days out and things to do and see. When I started this blog it was just going to be something personal, a kind of diary to look back on, but as time has gone on, more and more people read and as grateful as I am for the nearly 160,000 views I have, I’m less comfortable with sharing now, you can’t trust anyone on the internet and writing posts sharing personal thoughts and feelings gives people a lot of information to judge you on.

I do want to be as honest and as real as possible though. That being said, I thought it was time to do a post about how I’ve settled back into life here in Turkey and what I’m missing about England.

The first night I was here alone as Berkay had to work, and it hit me that I’d be spending a lot of my time alone again, I started to question whether I’d done the right thing and that maybe the grass is always greener on the other side… I also didn’t feel as ‘safe’ in this house, it’s much more central than our old one and there are more people around, it’s not as private.

The first few weeks I was here, I didn’t want to be in the house much, I was always bugging Berkay so we could go out and do something, walking, swimming, pointless trips to Fethiye… I think I wanted to spend as little time as possible in our house so that I didn’t get attached again, if it feels like home it’ll be harder to leave…

Well after being here 5 weeks I’m well and truly settled, our house DOES feel like home, there’s nothing I like more than sitting on the balcony with Berkay after dinner and just playing backgammon or watching a film. It’s just like the old days. I feel totally safe in our house and love it here. It took some getting used to living in a basic house again, no bath, no walk in shower, just a wet room with a tap and shower on the wall that makes the entire room and toilet seat soaking wet after each use! Not being able to flush the toilet paper took some getting use to again too!

I honestly do not miss England. I miss my family sometimes obviously, but I speak to my mum and grandparents everyday on Facetime without fail. I miss my little sister the most because we’re so close, no matter my mood she always cheers me up – I’ve been facetiming with Dad and seeing her, she always says ‘are you coming home yet Dan’ or mentions something about me coming back so I think she misses me too (:

I thought I might miss English food, a nice roast dinner, Cadbury’s chocolate, Monster Munch, ham sandwiches but I don’t really – although I am now drooling at the thought of all of the aforementioned! I love a lot of Turkish food so it doesn’t bother me much – perhaps the only thing I do miss is being able to chuck a ready made jar of sauce on the pasta or get some easy to cook, ready flavored Birdseye chicken out of the freezer. Everything has to be made from scratch – not much frozen food exists here!

I do not miss work at all, but I do miss having structure to my days. Anyone who knows me knows I have to have plans, I have to know what I’m doing and at what time, I’m not very spontaneous!

I’ve fallen into the habit of adapting to Berkay’s work/sleep pattern again. He works from 8pm – 9am everyday and sleeps either during the morning or the afternoon. I’ve started following that and not sleeping all night which is really bad – I’m still awake the same amount of time as anyone else, just all night instead of all day, which sometimes is a blessing as I don’t feel the unbearable heat. I’m still reliant on Berkay most of the time, when I lived here before I never went out without him. This time I walk the dog on my own and walk along Calis seafront a couple of times a week when he’s gone to work and just sit on the beach alone and watch the sunset. I love that.

All in all, I’ve settled back in and am still determined to make the most of every minute here. On Tuesday 8th Berkay and I have been together for 4 years. That’s really crazy, it seems like just yesterday we met, but then again sometimes it feels like we’ve been together so much longer, we’re like an old married couple, yet we’re not old and we’re not married. (;

I cannot believe it’s July already, how scary. More than half way through the year and I only have a few more months in Turkey… it’s not going to be any easier leaving this time than the last.
I’ll leave you with a few photos of the beautiful sunsets I witnessed in Calis last week. ❤

On his day off Berkay likes to go walking through Calis.

He took Boncuk with him and went for a long walk up a hill with a beautiful view from the top (click here to see my old post with photos of the view!) We used to take her for a walk everyday and more often than not ended up walking to the top of this hill, we always had it to ourselves which meant Boncuk could run free off the lead safely, with no cars, people or other animals nearby. She loves to sit up there and have cuddles, look down over Calis or just play fetch. It’s so peaceful there.

On the way back to the hotel they stay in, they took the road that goes past our old apartment (the top floor)… This apartment is nothing special, in fact it was pretty poor, and only 350tl a month, the equivalent of around £100 (which was still half of Berkay’s entire income!) .. but it was ours. It still makes me sad imagining other people in our house, cooking in our kitchen, sleeping in our room, sitting on our balcony… I try not to think about it too much, because when I do it just upsets me.
Click here for an old post with more photos of inside the apartment. 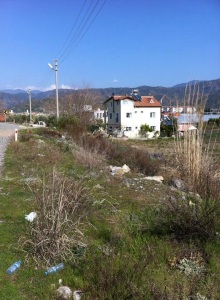 Anyway, after they got back to the hotel, Berkay left Boncuk and carried on walking to the investigate the new-look canal. I’ve mentioned in a previous post about the changes they are doing, but I really can’t believe how different it looks.
Here’s a photo of the canal (left) taken a year ago, and the new, wider, cleaner canal with no plants (right) taken last week, both photos taken in the exact same place.

The changes they’re making are all for the better, it’s going to look like a different place when I go back!