It’s been a while since we went for a long walk along Calis, in fact I hardly left the house last week apart from to walk the dog! It’s been extremely hot for the past week or two, with recorded temperatues hitting 40.5 oc in the shade on a couple of occasions, so it’s quite honestly been too hot to go out anywhere.

Today, although it was still a roasting 36oc we decided to go for a walk after dinner around 6pm, and the breeze along the sea front made it bearable.

We walked all the way from our end of Calis seafront to Mutlu hotel at the other end of the promenade. We stopped in the little garden area next to it, which was really busy with Turkish people enjoying their Sunday off and having a picnic in the park – it’s a bit weird, because it’s a not a big park area and certainly not somewhere you’d think to turn up with food and cay… I even saw someone had tied a hammock to the trees and was rocking their baby in it… each to their own though! It was funny as there were sprinklers all over the area watering the grass, and if any of them changed direction lots of people would end up soaked! We found an empty, dry bench and sat on that eating some sunflower seeds. Why is it when you decide to have one it turns into half a packet, and you end up with a handful of shells? I don’t even like them that much! 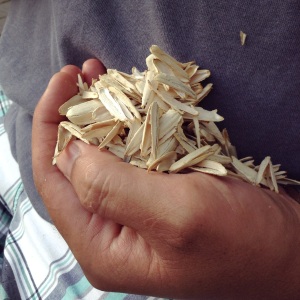 We decided to walk over the ‘new’ (it’s not really new anymore!) bridge behind the garden which leads to the other side of the canal – there’s a nice view from the top. They’re still working on improving the canal area, last winter they removed all the reeds and plants growing at the sides and replaced it with concrete and walls, and in the past month they have erected a green fence along the entire length of it – I’m not sure what the plans are for it eventually, but it’s definitely a work-in-progress. Lots of people seem to be concerned about the amount of wildlife that have been displaced during the process though. 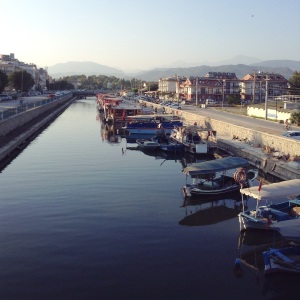 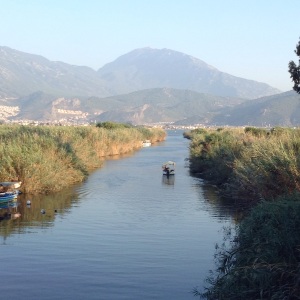 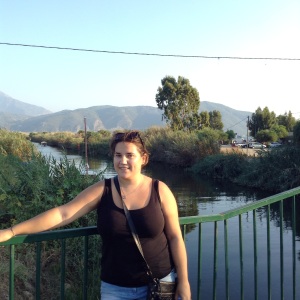 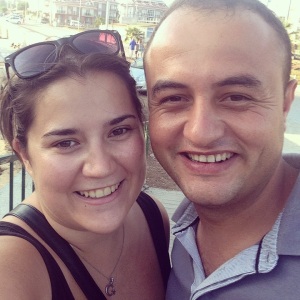 We walked along the road where all the little gift shops are and crossed the junction at the ‘dolphin roundabout’ to a new-ish pastanesi (cake shop) that opened around the beginning of the season, it used to be a restaurant, but I definitely prefer it as it is now because their cakes are amazing! I’d never been in it before but my favourite thing to do in Fethiye is go to Mercan Pastanesi and get something sweet, so knowing that this new cake shop is just around the corner is going to be a big temptation!  They sell coffee, drinks, spongecakes, cheesecakes, muffins, crossiants, biscuits, baklava…. there was a huge selection to chose from, but I knew what I wanted as soon as I walked in and spotted it…

How cute?! They had a hedgehog shaped chocolate cake too but I decided on the banana sponge lady bird cake, just because it was so adorable. Look at that little face! Honestly, I’m so easily amused, this cake seriously made my day. Who needs expensive presents from their boyfriend when they could just buy them a 4tl cake instead?! We actually ended up buying 10tl worth of cakes and took them home with us for later. 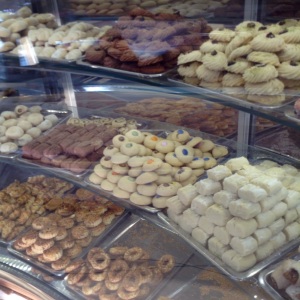 By the time we had walked back to ‘our’ end of Calis it was nearly 7.30pm and the sun was starting to go down, so even though Berkay had to be at work by 8pm, we sat and watched the sunset. I really notice how much earlier the sun sets now compared to a month ago – before the end of Ramadan the sun was setting around 8.30pm and today it set around 7.45pm! It’s not fun to think about but autumn/winter is on it’s way. 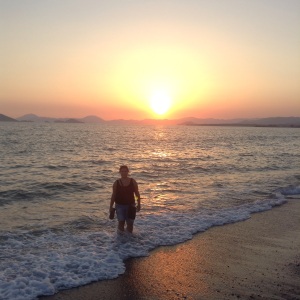 We strolled along the beach and dipped our feet in the sea, which was actually really warm, I could feel the heat coming off it every time a wave crashed against the stones, it looked very inviting.

We managed to catch the sunset before Berkay rushed home for a quick shower and went to work. It was a lovely walk, such a beautiful place to walk along in the evenings, I love it! We’re off to Fethiye tomorrow for a day full of visa paperwork. Oh the joys! It’s a good job the scenery is nice! (: 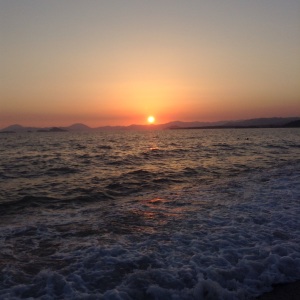 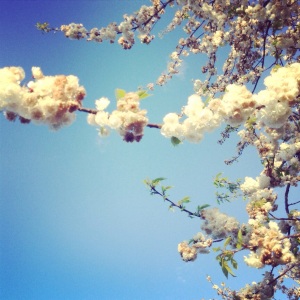 Yesterday while I was at work Berkay text me and said we could go for a little picnic…I knew a cute little place a 15 min walk from dad’s house, so we decided to go there. I picked up some supplies from the shop after work  and Berkay met me at the station when I got off the train.

We took a detour to a chip shop then walked up the hill to the park, which even though it’s literally around the corner to my house, I’d never been to before! It has ruins of an old Abbey on the grounds which makes it a really pretty looking place.

We found an empty bench, sat down and served up our picnic. Pasta, chips,crisps, bread, muffins..sunflower seeds 😉 By this time it was 6pm and everyone else in the park were just there to walk their dogs…they must’ve thought we were really strange. It reminded me of the good old days back in Turkey where we’d rock up to the beach fully clothed, pots and pans, cutlery, plates, food, blankets & salt pots in hand…while everyone else was sunbathing! 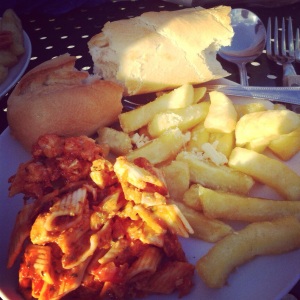 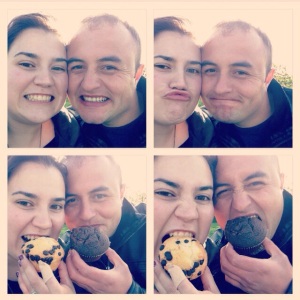 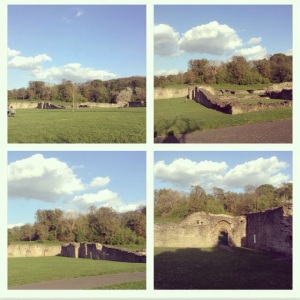 After we’d eaten we went for a wander around the park, through the ruins, which made for some good funny-photo opportunities 😉 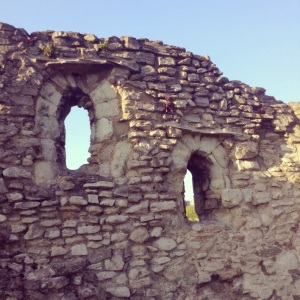 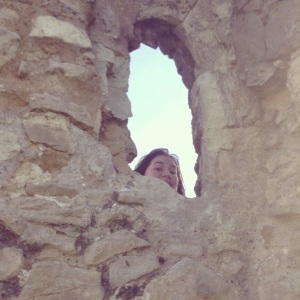 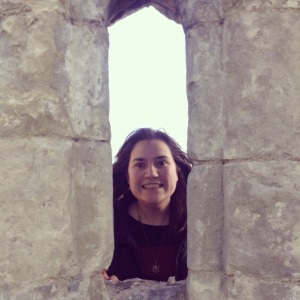 I had no idea how old these ruins were before – but according to google, Lesnes Abbey was built in 1178 … That makes them pretty old!! 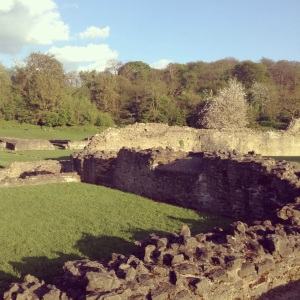 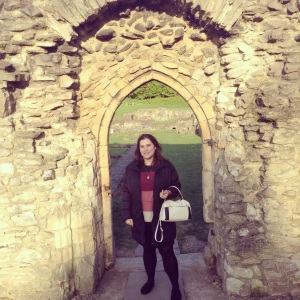 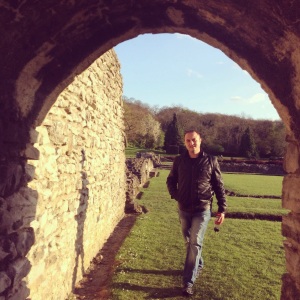 It was such a lovely place to just have a walk around – I think I’ll be going for a little wander around there myself once Berkay has gone back – so peaceful, yet popular with dog walkers and children on bikes. The weather was really good – Berkay has been lucky this time. Last April when we were both over, it snowed. He’s never seen England so sunny as it’s been these past 3 weeks, so we’ve been trying to make the most of it.

There were some really lovely trees and flowers around the park too – this being one very old tree – I can imagine it’s very popular with kids trying to climb it in summer, we just about resisted temptation to attempt to climb it ourselves, and instead settled for funny poses. Look at Berkay’s cool pose – all he’s missing is an Efes in hand ha! 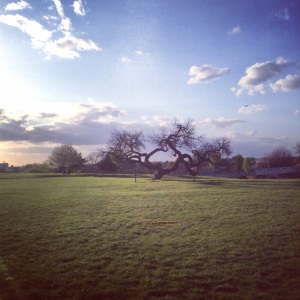 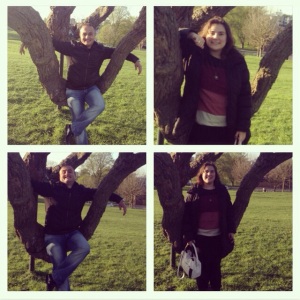 We had a lovely 2 hours and it really made me feel like the whole day hadn’t been wasted at work as we’d had quality time together too. Only 3 more days before he goes back…