When I mentioned that I was going to Akyaka, someone recommended that we go on a short boat trip along the river, and when we arrived and saw how beautiful it was, that’s exactly what we did!

We found the ticket kiosk and asked how much it was, I think it was 10tl each but I’m not 100% sure, I can’t remember, but whatever it was it was cheap and well worth it! We were directed towards a boat which had a few people already waiting, and as soon as we got on, they started up the engine and off we went. 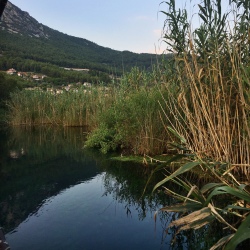 The Azmak river runs through the valley, winding, twisting and turning until it reaches the sea. It’s surrounded by tall reeds which make wonderful sounds when the wind blows.

We weaved in and out of the reeds and sailed along the crystal clear waters – they told us the water was a ‘natural aquarium’, perfect for the many fish living in it. It was so clear you could see right to the bottom, and it was deep! As we sailed along we admired it’s natural beauty, the sea plants and the shoals of fish swimming past, some were really big! We also saw a lot of pretty birds flying past or perching on the reeds singing. 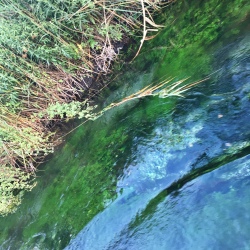 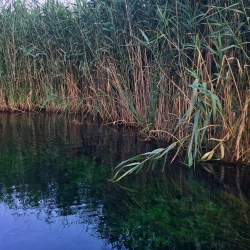 The fish and the birds were’t the only wildlife, at one point we turned a corner and came across a gathering of ducks, Berkay referred to them as the ‘duck mafia’ because they were all grouped together. It soon became clear why – on the other side of the boat there were several restaurants lining the route of the river, some of which had seating areas actually IN the cold water! The customers at these restaurants were throwing food in for the ducks, which they definitely seemed to be enjoying! 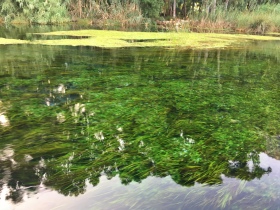 One part of the river in particular seemed particularly popular with locals, and they had taken camping chairs and picnics and were sat on the edge of the river bank, under the trees, feet dangling in the cold water, although some of them were diving in, right in front of the boats! I suspect that it was only busy like that because it was a Sunday, and during the week it wouldn’t be so bad.

After around 15 minutes the boat turned around and started its journey back to the marina area, giving us all another look at that beautiful ‘aquarium’ area of the river.

The entire boat journey lasted about 30 minutes, but was well worth it, very relaxing and a real natural beauty. I think we timed it perfectly as well, as when we returned the sun was starting to go down, creating a nice glow over the boats moored up in the marina. If you visit Akyaka, I definitely recommend a trip down the river Azmak. 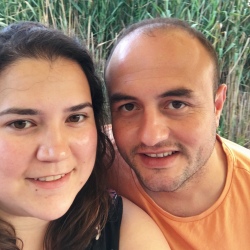 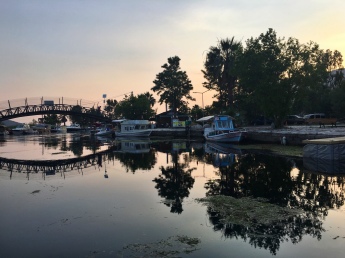 Right at the far end of Calis Beach, behind Şat restaurant, sits a bit of a hidden gem! I took the photo in 2014, but I assume you can still access the area now, I know there have been a few changes to that end of the beach. We walked around to the furthest point of the beach, where it was impossible to go any further without getting wet! It’s where the canal meets the sea, where the water taxis travel on the route to/from Fethiye/Calis. I believe the area is a kind of nature reserve, with wildlife such as crabs, fish, birds and ducks swimming around, as well as lots of reeds, plants and pretty flowers growing. The views from here are spectacular, offering a slightly different view point of mountains Babadağ and Mendos.
❤