Galata Tower was top of my list of things to visit in Istanbul, and I wasn’t disappointed! 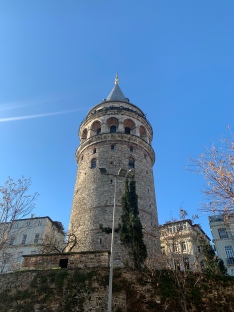 Built in 1348, it was the tallest building in Istanbul at the time – 220ft. It was designed with a military purpose, so it’s stone walls are 12ft thick. During peaceful periods, the tower’s main purpose changed, and it became a watch tower to spot city fires – so it’s ironic that it was damaged severely by a few fires itself. The tower was also damaged, repaired and altered several times over hundreds of years thanks to earthquakes and storms. In the mid 1960’s it was restored to it’s previous glory and opened to the public, with an observation deck boasting 360o views over the city.

We walked to the tower from Galata Bridge and oh my god, the stairs up towards it were a killer – even the pretty colours they were painted wasn’t much of a distraction, I had to stop half way up to recover – there must have been an easier way! 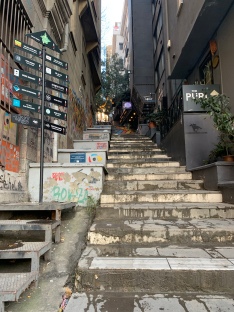 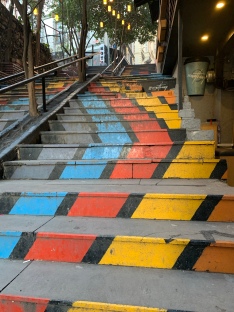 At the top of the steps there were some cute cafes and shops, and the street was narrow and cobbled. The shops were selling homemade goods, souvenirs, coffee, and a lot of the walls were painted with interesting street art, I couldn’t fully appreciate it as I was trying to get my breath back!

When we got to the top and turned the corner, I was so glad to finally see Galata Tower, and the walk up the steep steps had definitely been worth it. Built of stone, it’s quite a beast, and when you stand next to it looking up at it towering over you, it’s very impressive. It dominates the Karaköy skyline, looking beautiful both at day and at night. 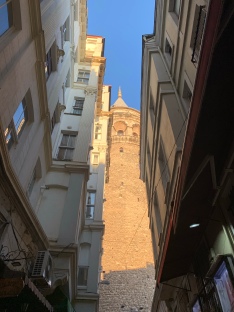 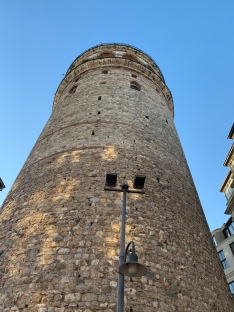 Everything I had read online and from friends, said that you can queue up for hours to enter as it’s so popular, even in winter, so we headed there in the morning at around 9:30am, and there was no queue whatsoever. We paid our fee to enter (I think its around 20tl for tourists, but for those with Turkish ID cards, it’s 10tl – I managed to sneak in for the lower price when Berkay flashed his ID and told them I was his wife!)

Thankfully, there’s a small but beautifully tiled lift inside that takes you close to the top of the tower, but you still have to walk up two twisty, narrow flights of stairs to reach the observation area – there’s also a restaurant inside up there too. 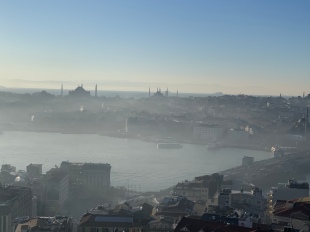 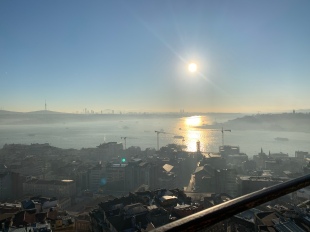 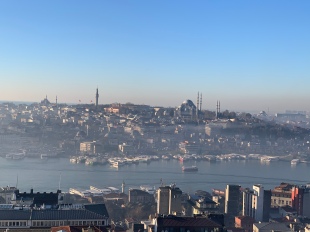 The outside observation area is very narrow, in some places only one person could fit through, and you had to really lean onto the railings to let someone squeeze past – not the safest, especially when people aren’t patient or can’t follow the staff that tell you to only go around in a clockwise direction!

It’s fascinating to think about all the things the Tower must have been witness to in it’s 600 years of existence. The views are absolutely stunning. Our morning was a bit hazy, but we could point out things like Topkapi Palace, Hagia Sophia, the Blue Mosque and Süleymaniye Mosque easily.

You can really see the mix of old and new from up there, modern sky scrapers in the distance and old, colourful houses and buildings all around the city.  There wasn’t a cloud in the sky, and the early morning sun shining down on me, coupled with the fact I was still sweating from the walk to the tower, meant I took my coat off – but don’t be fooled, it was cold, especially when we got to the parts in the shade! 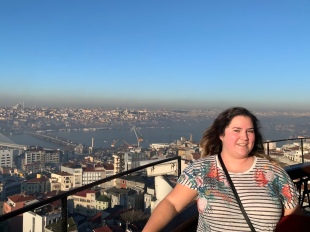 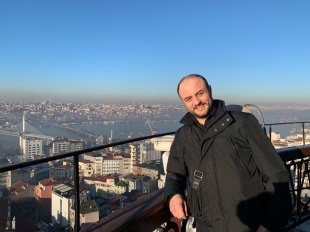 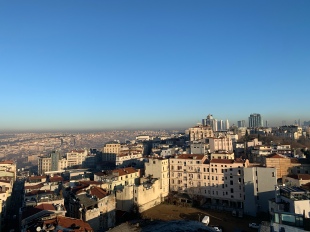 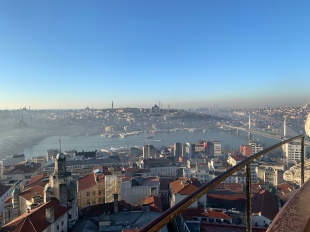 After spending some time at the top taking photos and being in awe of the view, we headed back down the stairs to where the lifts are on the 7th floor – I spotted the toilets and decided I really needed a wee. As odd as it sounds, the toilets were so cute, they even had a little window peering through the stone wall of the tower. The whole thing really reminded me of Rapunzel, so the Disney geek inside me loved it!

There’s a little shop at the bottom of the tower inside the entrance/exit and I got a cute, mini tower ornament which is sat on display in my living room.

If we go back again I’d love to go to the tower again in the evening, around sunset, because the views would be even more stunning! 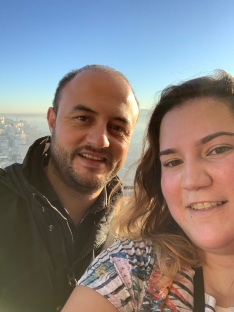 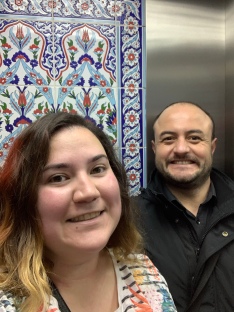 P.S click on any of the photos above to enlarge them and see them in all their glory! 🙂