The first morning we were in Istanbul we woke up early and headed out straight after breakfast – the sun was just coming up and it was freezing cold. We got the tram to Eminönü, just two stops from where we were staying in Sultanahmet. As soon as we got there we saw Galata Tower, dominating the skyline on the opposite side of the water, so we knew we were in the right place for what we we looking for – Galata Bridge/Galata Köprüsü.

The bridge crosses the ‘Golden horn’ stretch of water, from Eminönü to Karaköy, connecting the old town to the more modern, ‘hip’ area. You can cross it by foot, car or by tram, and there are 6 lanes so it’s quite wide!

The views from the bridge are amazing, especially early morning when we were there. The sun was still low in the sky and the cold, glowing, morning haze just made the view even more beautiful. Galata Tower can be seen on one side, while several mosques and minarets can be seen on the other, including the impressive Süleymaniye mosque. 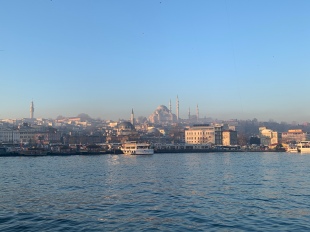 The bridge is very popular with locals who love to fish- we were there around 9am and there must have already been hundreds of men wrapped up in coats, hats and scarves, lining both sides of the bridge, from one end to the other, fishing. My photos don’t really capture just how many fishing rods were hanging over the sides –  we also crossed the bridge early afternoon one day and there were triple the number of people there and triple the number of rods! Berkay was amazed by it all, and loved watching to see what they were catching – although they only seemed to be small fish! He loves fishing and would no doubt happily spend hours there joining in. Some people were selling their ‘catch of the day’ too. 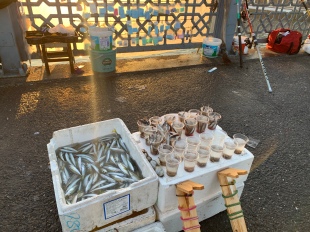 The lower level of the bridge has dozens of cafes and restaurants selling all sorts of fish dishes – and probably most famously, Balik Ekmek / Fish sandwich (we tried this but I’ll save that for another post!)

If you’re visiting Istanbul I definitely recommend taking a little while to walk across the bridge and soak up the views and the buzz of the cars, trams, boats, seagulls and fishermen – I bet it would be lovely at sunset too!

P.S click on any of the photos above to enlarge them and see them in all their glory! 🙂