When you think of Dalyan, you think of the beautiful Caretta Caretta turtles. Also known as Loggerhead sea turtles, they have an impressive average lifespan of up to 67 years, and can weigh around 300lbs!

In 2009, the sea turtle research, rescue and rehabilitation centre was founded in Dalyan. It is run by a team from Pamukkale University and helps dozens of Turtles every year.

The Turtle Hospital as it is more simply known, is located at the back of Iztuzu beach.

You can visit the centre, where a tour guide will take you around, giving you information, showing you replicas, and explaining more about their organisation. There are posters and leaflets in different languages, going into detail. The centre likes having visitors, since they aim to promote public awareness of the work they do and the need for their conservation and preservation efforts.

The first thing you come across is the mini museum with information posters on Akut 3, a fairly famous turtle! The body of the turtle is also preserved there. It was hurt in a boating incident and was unable to be released back into the wild because it was unable to eat properly with its damaged jaw. In a first of it’s kind special surgery, it was given a 3D printed prosthetic jaw! The turtle died a while later due to different complications but it’s very interesting to read about. If you do a google search on the name, you’ll find a lot of news articles about this turtle. 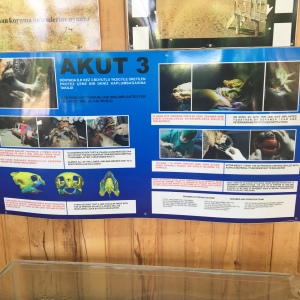 There is also information about the causes of injuries to the turtles, perhaps most disturbing is the fact that 20% of injuries are caused intentionally by humans, and another 19% by accidental collisions with boats etc.

You’re also taken on a little tour to see the turtles they are currently looking after – although the aim is to rehabilitate and release the turtles, sometimes it’s not possible, so some of them have been there for a while.

When we went in June, they had 5 turtle residents in their individual tanks, all various ages with different health problems. There are posters next to their tanks telling you their names, how old they are and why they’re there.

Aybüke – a 35-40 year old Caretta Turtle who has been at the centre since February due to a weakness meaning she won’t survive in the wild.

Selda – A 15-20 year old Caretta turtle, found in Bodrum and rescued 18 months ago after she swallowed a fishing hook and line. 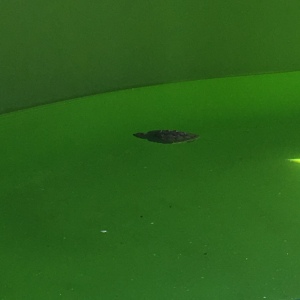 Kanki, a baby, just 9 months old, rescued from Sargierme due to having a problem with it’s left eye. Just look how tiny it is! 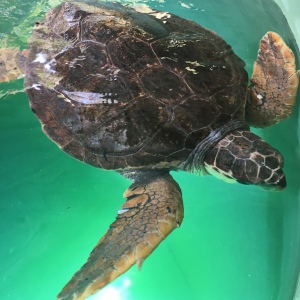 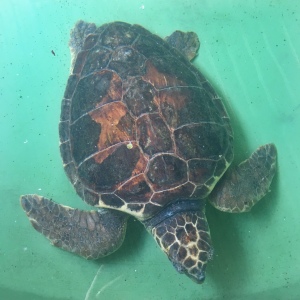 I can’t remember the names of the other two turtles but they were all very cute. So surreal seeing them up close. I did feel sorry for them living alone in their tanks swimming around in circles… but they’re not kept there for fun – they’re kept there because they wouldn’t survive if they were released in the wild to fend for themselves.

The centre relies a lot on donations, so there are collection boxes for you to put some cash in, if you wish (and after seeing the turtles, who wouldn’t want to donate!) There are also branded products you can buy, fridge magnets, bags, coffee flasks, keyrings etc.

If you’re visiting the area, or spending a day at that end of the beach, it’s well worth visiting the turtle hospital, it’s a rare opportunity to see them up very close, and have the chance to donate and make a tiny contribution towards helping them and their sea friends! 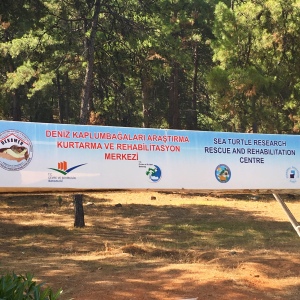