Kurban Bayram is the festival of the sacrifice, where millions of people sacrifice an animal to commemorate the Islamic prophet Ibrahim’s willingness to sacrifice his son as an act of obedience to God. Animals such as cows, goats and most often, sheep, are sacrificed. Once sacrificed, the meat is shared out, some is given to the poor, some is kept for the family, and some is given to other relatives, friends and neighbours.  Of course Kurban Bayram/Eid isn’t just celebrated in Turkey, it is celebrated by Muslims all over the world. In the UK the holiday is known as Ed-al-Adha.

While lots of people have time off from work for the holiday period, most people working in tourism will not have any time off at all, making it difficult for them to travel back to their families to celebrate, as they often live hundreds of miles away. Berkay is one of those people who works throughout the holiday and it is actually one of the busiest times at the hotel, so this weekend really just felt like any other!

We have no family at all here, they all live 4-5 hours away, so there was no chance to visit them. Instead, our old landlord invited us to go to their house for a BBQ. We used to live in the apartment above them so it was so weird being back there and seeing it all again. I used to love that old house, although walking back there yesterday made me realise how inconvenient it was, you can see that it is in the middle of lots of fields, there are sheep, goats, cows and chickens in the gardens and it was very much like a farm. From looking at the photo, you’d find it hard to believe that the tourist resort of Calis is just a 15 minute walk away.

We arrived at 11 o clock and missed the sacrificing of the goat, which I was thankful for. I stood on our balcony and watched the sacrifice 2 years ago, and although it was peaceful and the animal didn’t suffer for long, it was upsetting. We live in a day and age where we are truely spoilt, and are able to buy meat all cleaned up and neatly packaged in the supermarket, we see it as an item, and don’t consider that it was once an animal trotting around a field somewhere… I have nothing whatsoever against the sacrificing, I would be a hypocrite if I did as I enjoy meat far too much to be a vegetarian, however, sometimes ignorance is bliss. The good part is that none of the animal goes to waste, they use the skin and wool, and every edible part, including the tongue and brain (yuck). I suspect that a lot of the population of Turkey will be eating sheep, or goat, for breakfast lunch and dinner for the next few days!

While we were sat in the garden waiting for the BBQ to heat up, lots of people came to greet us with an ‘iyi bayramlar’ and a handshake, or when greeting people significantly older than ourselves, it’s our job to take their hand, gently kiss it then raise it to touch our foreheads as a sign of respect, something I still struggle to remember to do! Traditional bayram ‘seker’ or sweets were also handed out to us.

Once the BBQ was warmed up, a massive bowl of VERY fresh goat meat was plonked in front of us ready to be cooked. A wonderful spread of salad, aubergine salad, yaprak dolma (vine leaves stuffed with meat, rice and herbs), bread and of course lots of fresh meat,  was laid out. Other neighbours, friends and relatives of these people came over and everyone shared the food. It was absolutely delicious. I really wonder why people don’t eat goat more often! 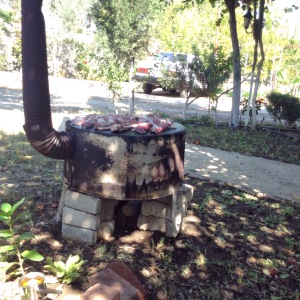 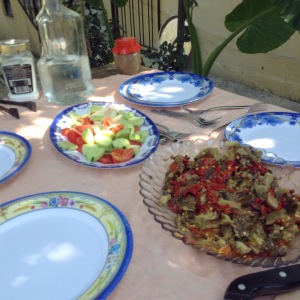 We stayed for around 3 hours then headed back home, Berkay went to sleep for the rest of the day, then straight to work at 8pm in the evening, no rest for the wicked!  Whilst out walking Boncuk, I saw these two sheep in  a garden near our house, I know their fate isn’t good, I was half tempted to go and rescue them! Instead I settled for patting them on the head. They’ll be somebody’s dinner tomorrow probably…

Although people may criticise ‘resort life’ as not being a true Turkish lifestyle, during holidays like this alot of people go back to their roots and participate in these old customs, at least this my experience here in Fethiye. I love taking part in their customs and traditions during days like this, I think I was more excited about it than Berkay was honestly!

Bayram continues until and including Tuesday, with banks, schools and government offices opening again on Wednesday. We won’t be doing anything else to celebrate, but tomorrow we are borrowing a friend’s car for the day and going for another BBQ, we have a fridge full of goat ribs given to us by Berkay’s friend, so it would be rude not to really, wouldn’t it?

Click HERE to read how Berkay celebrated bayram last year, although be warned that it does contain photos of animals during the sacrificing process that may upset some people.