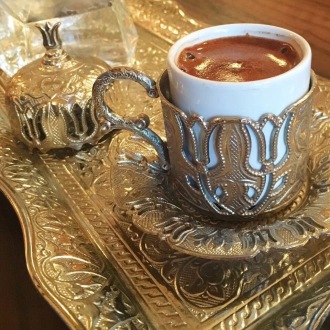 Turkish coffee is very strong and very thick black coffee. It’s unfiltered, so you really need to master the art of avoiding swallowing the grains at the bottom of the cup, otherwise it won’t be a very pleasant experience! It’s always served black, with a small glass of water, and is often accompanied by a piece or two of sweet Turkish delight.

It’s served in tiny, porcelain espresso cups, some of which have beautiful brass or copper cases, with intricate designs and patterns, making it look rather regal!

Turkish coffee has it’s own traditions. When a boy wants to marry a girl in Turkey, the boy and his family have to visit the girl’s family’s house to ask for their blessing in marriage. Whilst there, the potential bride will make Turkish coffee for the guests. Sometimes, she puts salt in the potential groom’s coffee, instead of sugar, and waits for his reaction. If he doesn’t react negatively, or show his disgust, it’s said to show his good character.

Turkish coffee also has fortune-telling abilities. After you finish your cup, turn it upside down on the saucer and wait for the grounds to form a pattern. Some people are able to read these grounds and interpret the meaning. Last year, when Berkay was awaiting the decision of his visa application, he had a BBQ with his friends. One of their wives made coffee and they sent a photo of the remaining grounds from the bottom of the cup to an app which reads them and tells you the meaning. The app said Berkay’s meant the following: “you’re waiting for some results and they’ll be on the doorstep tomorrow, it’ll be good news. You’ll be going on a long journey”.. and how right they were too, because the very next morning the visa arrived in his hands!!