I haven’t posted here for over 6 weeks now, I have a lot I want to post and write about but I just haven’t had time.

The main reason for that is that I FINALLY found a full time job! I started 3 weeks ago and I’m enjoying it. I’d been looking for work since December but had no luck, other than a few days for an agency. I had applied for hundreds of jobs and kept getting knocked back, even after going for interviews etc. Finally my luck changed and an agency put me forward for a 3 month placement for a really interesting company who are based inside Canary Wharf – I went for the interview and got the job. It was overwhelming at first, I’m not a ‘people’, so the first few days of travelling to Canary Wharf in rush hour was a bit of a shock, but not quite as overwhelming as the chaos that is lunchtime inside, and around One Canada Square and Canary Wharf. Thousands of people queuing up, buying, sitting and eating their lunch all at the same time – it was really horrible at first. I’ve found ‘my’ spot now where I sit everyday for lunch and read my book (oh, hello Mr Grey 😉 ) , and even though it’s still busy and overwhelming, the initial shock has worn off! This is the view I face everyday whilst eating my sandwich – isn’t it pretty? I work inside that middle building, on the 30 something floor – eeek. I’m actually enjoying the role and it’s such a relief to be back into a routine and earning money – the last 3 weeks have gone very quickly so keeping busy at work certainly makes the days tick by faster.

Berkay is also being kept busy in the army. He’s finding it a lot harder than he anticipated and he can’t wait to get out and have some freedom. He’s still based in Kayseri, although there was a scary moment where he faced the prospect of being moved to a more dangerous area – thankfully he didn’t have to go. He gets a few hours off most weekends so he can go outside and speak to me on skype and he’s made two good friends there who get the same hours off as him so he wanders around the nearby shopping centres with them for hours. He says they are all the ‘oldies’ and people refer to them as such, because they’re mid twenties and most people doing their national service are a lot younger than that. I’m glad he’s made friends. He’s been in there for 5 months this week – another 7 to go, and he’s counting every single day.

I’m still moving the marbles from my ‘days to go’ jar into my ‘days down’ one, and it’s a relief seeing nearly equal amounts in each! Berkay has a little list of days in the shape of ‘365’ that he’s ticking off one by one – bless him.

One of the things I was most worried about when Berkay went in the army was Boncuk, where she’d go and how safe she’d be. Initially she stayed with our friends for the first 2 months – and when I was there in April we took her to Berkay’s family’s village instead. Berkay’s brother promised me he’d look after her, but I was still worried because although they have farm animals and care for them, a dog is different. Turkish people don’t really like dogs like we do. They have their own dog, used to guard the sheep – they don’t feed it proper food, just bread and the occasional sheep/goat hoof when slaughtering time comes around. Needless to say, when we turned up with Boncuk, her bags of food and asked Berkay’s dad to save her a bit of fish from his dinner plate so that we could get her to take her worming pill, they thought we were nuts. Thankfully, Berkay’s brother is lovely and has been looking after her nicely, sending me photo updates and answering all my ‘Boncuk nasil?’ messages! He says she loves him and jumps up him wagging her tail whenever she sees him. He even takes her for walks, which is unheard of in the village, people look at you like you’ve got two heads if you’ve got a dog on a lead but think nothing of someone walking along with a flock of sheep instead. Last week Berkay’s cousin was visiting the village and sent me some photos – I was sat on the train coming home from work when I got them and it made my whole day, Boncuk just looks so happy doesn’t she? Such a relief. 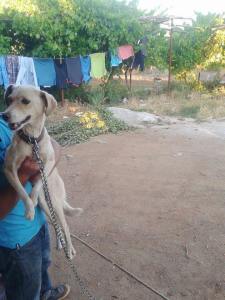 P.S I’m off camping this weekend, but I hope to have another post up sometime next week – I still have a lot of lovely photos of Fethiye to share. If you’re interested in more photos, join our Facebook group www.facebook.com/groups/TurkishDreams where me and 3 of my friends post daily photo challenges among other Turkey related things! (:

13 thoughts on “New job for me, farm life for Boncuk & the army countdown continues..”