We spent the afternoon at the vet with Boncuk yesterday. 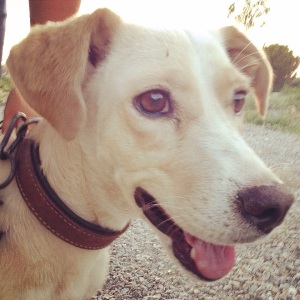 I noticed a few days ago that she was shaking her head a lot and she had started to cry when we were stroking her left ear, I tried to get a look inside to see if I could see something stuck in it but couldn’t see anything. It was Bayram so our vet was closed and we decided to wait a few days to see if it would get better itself or if she was still in discomfort – obviously if she was in pain we would have taken her right away, but she was her usual crazy self, jumping all over us and wagging her tail!

It didn’t get better over the holiday period – and I could tell it was infected as it was red and crusty… ewww. So this afternoon we took her. It was really hot and humid today so I was dreading the 2.8km walk to the vet, and the 2.8km walk back again… luckily Berkay spoke to his friend and managed to persuade him to take all 3 of us in his car, with Boncuk in the boot on a bedsheet. She hates being indoors so I thought she’d be scared in the car but she seemed to quite like it, no fussing, she just laid down, bless her.

She’s a clever doggy, she knows exactly what it means when she sees the outside of the Vet’s surgery, we attempted to walk inside and she sat her bum firmly down and wouldn’t move, she definitely is not a fan! We eventually had to pick her up to get her inside, she always gets so much attention in there, the vet and his mum are so friendly, you can tell they really love animals!

He had a look in her ears which made her yelp in pain, I felt so sorry for her. She was so good just laying on the table, a lot of dogs would growl or bite them if they felt threatened but she just laid down, she’s so sweet-natured! The vet was so gentle with her and his assistant stood and stroked her head and was talking to her. He decided he needed to give her an injection to make her sleep so he could look inside and clean them properly, he told us to go outside and sit with her for 15 minutes and that she should fall asleep – she was really fighting it bless her, she refused to sit or lay down and just stood up next to us with her nose resting on Berkay’s leg. Look how sad she looks in the photo, her ears were all floppy, eyes all droopy… but she was still fighting it and even managing to wag her tail at us!

Eventually she did go to sleep, the vet managed to clean her ears and confirmed that she had an infection probably caused by ear mites. We were worried about how much it would cost, but it wasn’t too much. It was 65tl (£18) altogether for the injection, cleaning and ear drops… we ended up paying another 20tl (£6) and getting her booster vaccination and flea prevention done too.

The best thing about the whole experience was when we walked out of the surgery, and the vet said ‘geçmiş olsun’ (get well soon) to Boncuk. Is that not the cutest thing?

By this point Boncuk was feeling very sorry for herself. Again we were really lucky that the vet had to drive past our house in order to drop another dog home, so he let us take a free ride in the back of the car. The whole car journey home Boncuk wouldn’t look at me, she had her head down and was definitely being a sulky pants. Her face just said “I’m not talking to you anymore – you made me go to that nasty man who poked my ears.”

Boncuk’s sulky ‘I’m not talking to you anymore’ face.

I think she’s gotten over it now though, Berkay’s been at work all night so he’s been at the hotel with her, he says she’s happy again now with her little waggy tail and no more sulky faces! Hopefully the ear drops will work and we won’t have to make another vet trip anytime soon.

It’s really hard to find a decent vet around here… some I feel are very over-rated, while others rightfully have a bad reputation. I think we’ve found a good one though – Suckun at Ankavet. He obviously really loves animals and is so gentle with them. Boncuk went there last month to have her hair cut and they ended up giving her a pom pom fluffy tail, she looked so cute! They are so friendly and really helpful too. Today they let us take home a 80tl (£22) 15 kilogram bag of dog food on a ‘pay later’ promise… we’ve done that before so they trust us to pay it back. We also purchased Boncuk’s kennel from them previously and they have boarding kennels for dogs to stay in short-term. If anyone is in the Fethiye area and needs a vet, I definitely recommend them. A link to their website with contact details – http://www.e-fethiye.net/ankavet.html
Here’s hoping Boncuk is back to her normal, crazy, rolling in grass, hyperactive self soon! 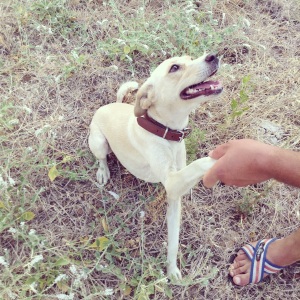 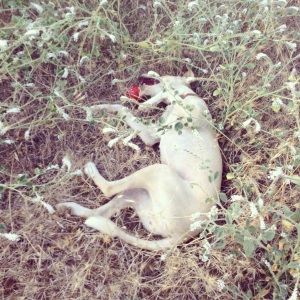 ← What is Şeker Bayramı?
The cost of living in Turkey… →