Pamukkale, meaning “cotton castle” in Turkish, is a place of natural beauty in Denizli province. It is a UNESCO world heritage site and tourist hot spot for many visitors to Turkey, who travel from all over the world to see it.

We have visited Pamukkale twice, once in 2011, and once in 2016. The site itself is in a purpose built touristy town, which now doesn’t really have any other purpose other than to provide basic accommodation for a night or two for visitors of the site. All around there are gift shops selling souvenirs like fridge magnets, postcards and posters showing Pamukkale during its glory days, bright white travertine terraces filled with turquoise blue waters. I think perhaps they need to reevaluate their advertising material though, as I will discuss later on.

When you approach Pamukkale from the main road, you see the huge white ‘cotton castle’ hills which look quite dramatic against the rest of the surroundings – it seems very out of place, but strikingly beautiful and different. There is a lake around the bottom, which has ducks, frogs, turtles, fish and other wildlife swimming around. When we visited back in 2011, the water appeared a different colour, and the bushes were growing around with beautiful pink flowers, but when we visited last year, the water was definitely more ‘green’ with less flowers, as you can see from the below two photos. The last time we were there, we had a go in one of the pedalo’s that were available to rent for 30 minutes – it was a spur of the moment thing and quite funny! It got us a closer look at the wildlife, and we spotted a few small turtles swimming around us. After the pedalo, we stopped for an icecream, real Turkish dondurma, the thick, almost stretchy kind, which was lovely. We sat on the grass eating it, admiring the view and were approached by two ducks and a cat, all wanting to share with us!

There are two main entrances to the protected Pamukkale site itself, one at the bottom, one at the top – we have used both. The entrance fee is currently 35tl, and it is open from 8am-9pm in summer, 8.30am – 5pm in winter according to the website.

The views from the top of Pamukkale are amazing, my photo doesn’t really do it justice. You can see for miles and miles, and you seem to be a lot higher up than it looks from below.

To walk on the white formations themselves, you have to remove your shoes, so make sure you bring a bag or rucksack to put them in. There are security guards armed with loud whistles who aren’t afraid to blow them straight at you if you don’t comply with the no shoes rule!

You’d expect it to be cool, it looks like it should be made of ice, so seeing such a thing in the middle of 30oc temperatures seems bizarre, but of course it isn’t ice at all, it’s made of travertine, a kind of limestone deposit from the calcium-rich natural hot mineral springs. Some parts are smooth and slippery under your feet, other parts are solidified and feel sharp and spikey, so the walk down/up isn’t really an easy one. In summer, particularly in the afternoons when the tour groups arrive, the place gets very busy, but we visited in April and October so avoided too many people both times, luckily. The white deposits do look beautiful, and its certainly a brilliant place with great photo opportunities and beauty, however, I do find it a bit disappointing, as the natural beauty seems to be threatened. 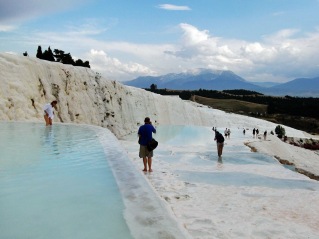 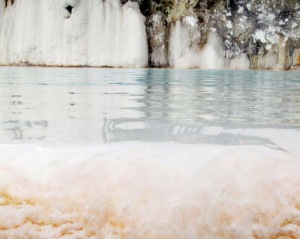 Apparently, back in the 60’s and 70’s hotels were built at the top of Pamukkale, which stole the vital water supply to fill their own thermal pools and spas and this had a huge detrimental effect on the site. There was also a road built through the site, with motorbikes allowed to drive up and down! The hotels and road were demolished when the site became protected and the damage became obvious, but I don’t think it’s ever recovered, and in an effort to restore the natual beauty, they have actually ‘faked’ a lot. If you google Pamukkale, or look at any souvenir fridge magnets, postcards or poster adverts as I mentioned earlier, you will find images of people in their swimming costumes laying out on the natural terraces, bathing in the travertines, basking in the sun. This is no longer possible, as it was found that the bathing, suncreams, oils, perfumes, shoes and general human interference, was affecting the natural beauty and discolouring the once pure white deposits. 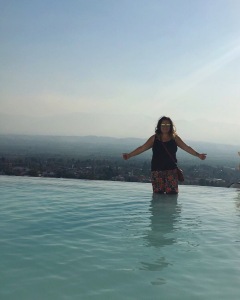 Understandably, you are now only able to walk on very specific sections of the site, and the security guards I mentioned above are strict at enforcing this. There are pools you are allowed to walk and paddle in, all the way down the side of the walk way from top to bottom, but these pools are all man-made which is really disappointing to me. Even though I understand why they had to intervene and prevent further damage to the natural beauty of the site, I feel like they could have made more of an effort to make the man made pools mimic the natural, flowy, waterfall like terraces. Instead, they are were all made the same size, shape, height, and water diverted over them to encourage the deposits to form. Sure, it’s still fun to paddle in them and get some good photos, but the thing is, I’m not sure if people realise these pools were man made! The below photos were taken in 2011 but show the height and uniform shape of the man made pools. 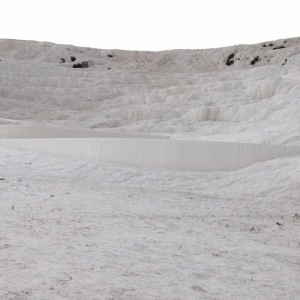 The natural pools do still remain in tact, but are rarely, if ever, filled with water as the flow is diverted down through a man-made channel and dam to other section, it’s a shame the water isn’t left to flow naturally. The photo on the right isn’t one I took, just one I found on the internet, presumably taken a few decades ago. The photo on the left is one I took of the same pools as they looked in 2011, almost dry and no longer able to be bathed in like the adverts or tour operators all suggest.

Sadly, despite being a protected world heritage site, the efforts they have gone to to prevent further damage to the natural beauty of Pamukkale and its travertines do not seem to be working. The photo on the left below is one I took in 2011, the one on the right from almost exactly the same angle in 2016, showing even more discoluration and erosion occuring over the years, and the pools all dried out.

I know I sound very negative but I do still think Pamukkale is well worth a visit, just go in with realistic expectations. While researching to write this post I looked on Tripadvisor and found many, many bad reviews complaining about the ‘dry pools’ and commenting how it doesn’t look like adverts they were shown when booking the trip. My advise is definitely go and visit, but just know that it no longer looks as it did 30-40 years ago when those pictures were taken, I don’t know why they don’t update them to be honest as it’s still impressive, just different. 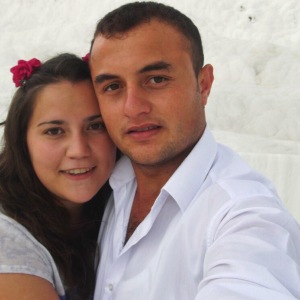 The travertines aren’t the only things that have aged in the last 6 years – check out the two photos of us at Pamukkale taken 5.5 years apart.

Right at the top of the the white terraces of Pamukkale sit the ruins of the ancient Greek-Roman city Hierapolis.  During the Roman period, Hierapolis had very much a spa and health focus with lots of baths. People flocked to the baths as they thought they had healing properties, which is ironic as Hierapolis has the largest necropolis/cemetery! It is thought many people traveled to the city to spend their last days, hence the large cemetery. One of the thermal pools remains and is open to the public for a fee – according to the website its 32tl per person to swim, but we have never done this as we thought it was way too expensive, but there are seating areas and a cafe for people who don’t wish to swim, it’s a very pretty place surrounded by greenery and flowers. The pool is very warm from the hot springs, and is still thought to have health benefits. I’m not sure how much of the pool is actually natural – but it’s said that Cleopatra swam there, or close by, hence it’s advertised name ‘Cleopatra’s pool’. Ruins in the pool apparently fell during major earthquakes, some of the marble columns are even thought to have fallen from the Temple of Apollo, making the pool sacred.

As well as the pool, many other beautiful ruins can be seen at Hierapolis. There are lots to explore, ancient streets, temples, statues, necropolis, gates, churches and the most impressive, a huge theatre which can seat thousands. You can walk right to the top of the theatre for amazing views but we have never done this. There is also a museum which you can enter for a small fee with even more to explore. Honestly there are so many impressive detailed ruins to see over quite a large area, you could spend a whole day just walking around slowly seeing it all. My photos don’t really do it justice, as by the time we’ve walked around Pamukkale and have been in the sun for an hour or two, we are too hot and bothered to walk around the ruins as well, as there isn’t much shade. We definitely need to go back and see a bit more, maybe in a cooler month, and definitely climb the stairs to the top of the theatre.

Back in October when we were there, they actually had moped’s to hire to help get around the ruins quicker as they cover such a distance, and although handy, I’m not so sure it’s a good idea! 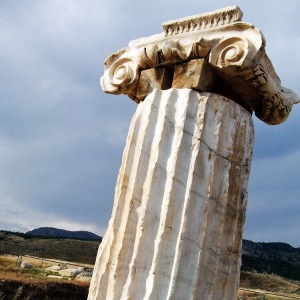 All things considered I really do think Pamukkale is worth a visit, even though its a long way from the resorts in Fethiye etc. It’s the single most visited tourist spot in Turkey, apparently, and it’s easy to see why, but don’t go in expecting it to look as it did 40 years ago, or you will be disappointed. If possible, try and stick around the site for sunset because I’ve heard that is especially beautiful to witness there.

It’s lovely to see the beautiful natural creations, however, the inevitable interference from humans, for the purpose of tourism in particular, has threatened this natural beauty – with it being a UNESCO World Heritage Site, I hope it will continue to be protected.

2 thoughts on “Pamukkale – a Natural wonder?”