On Sunday we had a rare evening together and went to a football match – Fethiyespor v Menemen Bld.Spor. Berkay arranged to go into work 3 hours later than normal so after dinner we headed into Fethiye town centre.

We had been trying to get tickets for the game in advance but they kept telling us to ‘come back tomorrow’ – much like everything else in Turkey it was very unorganised! In the end we just gave up and got them from the gates on the day. We got the cheapest seats which we only 5tl… bargain!

After getting tickets from the stadium (just behind the Tuesday market area) we walked back in to the main town and sat down in a little cafe for some ice-cream. It’s real Turkish icecream and if you’ve ever eaten it you’ll know what I mean when I describe it as slightly chewy – it’s delicious and really filling. We got 4 scoops for 2tl which is an absolute bargain. I’ve heard horror stories in recent weeks of people being charged £10 for one ice cream in resorts – even 10tl would be extortionate! This was a massive ice cream, I got a mixture of lemon, blackcurrant and chocolate chip…dipped in chocolate sauce and nuts. Yum. They have so many different flavours to chose from too. 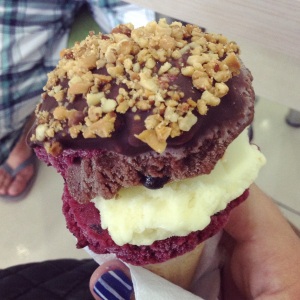 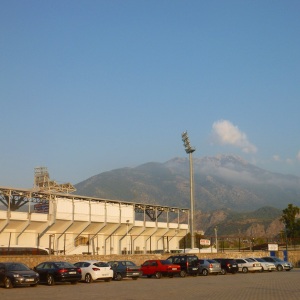 After that we took a slow walk through the park in Fethiye and managed to catch the sunset – click HERE for my previous blog post for photos of that.  I love this park and it’s so much nicer to walk around in the evenings when it’s cooler and the sun isn’t directly overhead. 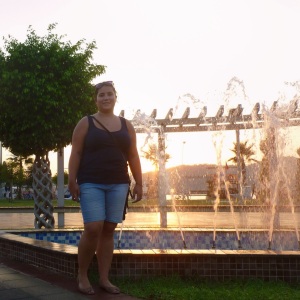 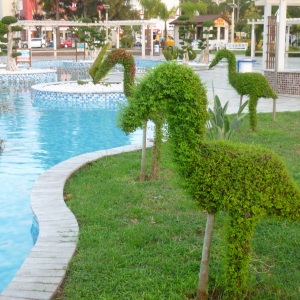 Berkay popped to the shop to stock up on sunflower seeds for the match (you’ll see why if you keep reading) and then we headed off to the stadium again.

I was suprised by how much security was outside the stadium. There were stewards searching people and police with guns and truncheons, it was really quite intimidating. I used to have a season ticket for Chelsea FC and considering the massive difference in the standing of both clubs, there wasn’t an awful lot of difference in the security measures in place, the only things that were missing were police horses! At Chelsea games we were allowed to take our bottles of water inside the stadium as long as the lids were thrown away (or hidden in our pockets – shhh) but here they didn’t allow any kind of bottles – strange.

Once through the turnstiles we searched for our correct seats, but failed to find them. The numbering seemed to be totally illogical – I ended up sitting in seat 245 and the seat next to me was numbered as ‘407’ – go figure! It didn’t matter, because despite the speaker on the tannoy announcing that everyone should stick to the seat number stated on their ticket, very few people actually did.. at least not in our stand. There were very few stewards inside the stands, I can’t actually recall seeing any. 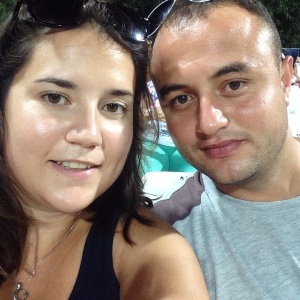 There was a small snack place to buy food in, none of the usual hot dogs, burgers, pies and pints of beer though – toasties, chicken doner kebabs only. There was also a crate full of packets of sunflower seeds  for sale which seemed to be everyone’s snack of choice! Turkish people do love their salted sunflower seeds, they eat them like a little chipmunk or something – it’s quite a skill to master or you end up with a mouth full of cardboardy shells. Bleugh. Literally everyone was eating these, and none of them seemed to care where they disposed of the shells – look at the massive pile Berkay made on the floor!! After all the salt we needed a drink of water so had to buy one from the young boy selling them from a massive ice barrel in the corner of the stand – they were 1tl each, for a tiny little carton.

It was soon national anthem time, something the Turkish people take very seriously. Everyone stood still with their hands by their sides singing along. Nobody moved a muscle apart from the photographers! 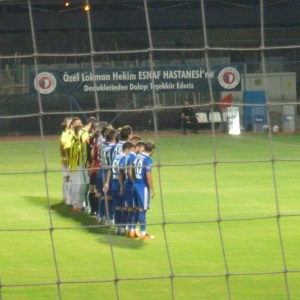 I enjoyed the game, although it was very frustrating as neither team managed to score and boy did they have a lot of chances! Even my Fethiyespor themed nails didn’t bring them luck.

The match was pretty much the same as any other game of football I’ve been to, passionate fans, jeers, swearing and booing at the referee, fights on the pitch leading to red cards and players diving all over the place. Oh, the beautiful game eh? Don’t get me wrong, I do love football.  I thought it was interesting how they had a ‘water break’ 23 minutes into the game due to the hot weather, something that is certainly never necessary in England. 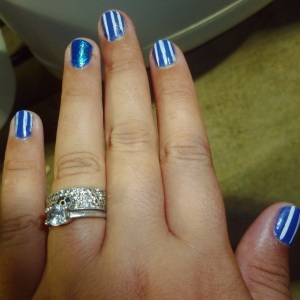 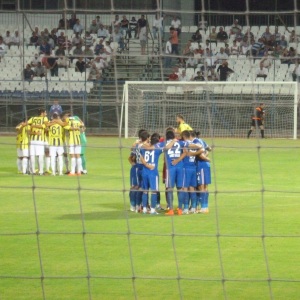 There are a very passionate set of Fethiyespor fans in one of the other stands, they’re the hardcore, season ticket holders. They were singing and banging drums for much of the match – I found it so funny how most of their chants were to the same tune as the football chants I’ve heard at Chelsea – different words, different language, same tune!

The match ended in a 0-0 draw which was disappointing, but it was a good evening regardless. As soon as the full time whistle was blown we hurried out of the stadium, got on the dolmus and headed home, Berkay went straight to work. I wish he’d get a full day off sometimes, he’s not had one day off since the end of May and isn’t likely to until the season is over in November. I’m thankful that his boss and his colleagues are flexible and will allow him to make up hours if he asks to go in late.. that’s better than nothing (: