You wait around ages for one then 3 come along at once …  quite literally!!

Berkay quit his job mid January, and was struggling to find work with hotels not wanting anyone outside of the tourist season.. His luck changed last week when a hotel in Fethiye called him asking him to start the next day, he said yes, but just before he was due to start, the restuarant he was at before Christmas called him wanting him back, pay was less but they provided his transport so it worked out around the same.. he took that job and was there for 3 days when his summer boss called and asked him to start working in their sister hotel, which is open all year around. Berkay couldn’t believe his luck! He knows this boss well and works with him every summer so he knows he is guaranteed to be paid unlike last winter when he worked for 2 months without a penny being handed over..
So now Berkay is working in Vizon hotel in Fethiye’s main town centre. It’s a very Turkish hotel, it’s rare any other nationalities visit, it’s not touristy at all. He’s happy there and gets along well with the other staff who he’s known for over 7 years. I’m so pleased he finally has a job so he can start earning and saving, the best part is they’re letting him have 3 weeks holiday to come back to the UK in March/April so he has a guaranteed job when he returns too. Phew.

It’s not just Berkay that’s been having luck on the job front, I finally have a start date for the job I’ve been promised since the beginning of January, I’m starting on Monday and pleased that this is the first step of a very, very long journey towards getting Berkay here for good In other news… My little doggy Boncuk has a boyfriend! His name is Maxi and he lives near where Berkay stays. Maxi and Boncuk used to ‘talk’ to each other through the gate, and when Berkay opened it to let him in the other day, they shared a little kiss 😉 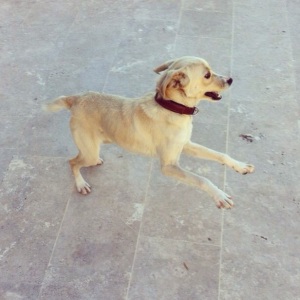 I’m missing Turkey a lot lately, but Berkay is keeping me updated with photos.
7 weeks time and he will be back here! Can’t wait.