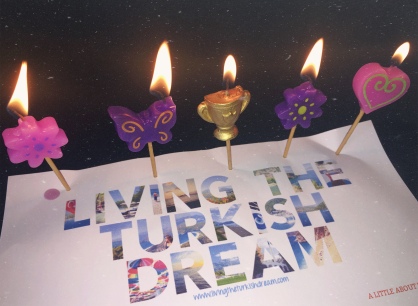 Today is my 5 year blog birthday!

In August 2013 I was living in Turkey and had been living there for two years, I decided to start writing a blog to share my experiences and let people see that living there wasn’t all one big holiday! A month after starting my blog I actually moved back to the UK (which ended up being temporary..) and then it became more of a place just to write my thoughts about moving back. Then a few months later I moved back to Turkey again, carried on writing about life living there and exploring the area. Then of course, Berkay went into the army for his national service so I wrote about that a lot, if you’ve been following me since 2015 you will remember my countdown posts! He finished the army, we got married, applied for his visa and now we live in the UK.
I haven’t really been concentrating on my blog as much over the last year as I kind of fell out of love with the country a bit, having seen too much of a side I don’t really like… however, after our most recent holiday back in June I fell in love with the place again and have been trying to be more regular with my posts!

Back in April I finally reached 1,000,000, ONE MILLION views, which was very exciting, so thank you for everyone who reads my posts or follows me, really much appreciated!

Just for fun, here’s a link to my first ever blog post where it all began:
https://livingtheturkishdream.com/2013/08/18/a-little-about-me/