Swearing in ceremony and army life for Berkay.. 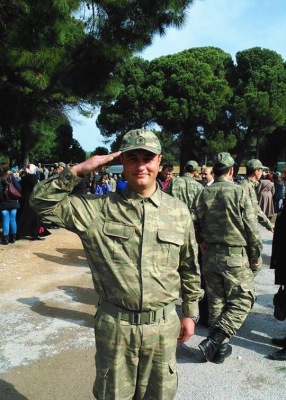 Its been 26 days since Berkay first walked through the doors into the Izmir army base, and on Friday he completed his basic training and had his swearing in ceremony.

All the hundreds of men in the Izmir base stood together and marched, taking their oath and swearing their allegiance to the Turkish military to serve and protect their country and fellow citizens. Turkish people are very patriotic, they have a great respect for their history, their military and their country, so to serve in the army is something that they are very proud of, even though it’s compulsory.

Some of Berkay’s family made the 3 hour journey from their village in rural Denizli to Gaziemir in Izmir, where he is based. I was a little surprised they all turned up as they’re not overly close to him, but I’m glad they did as it meant he got to spend a few hours with them which I think made him feel a little better.

As for the actual cermony, I’m not entirely sure what it involved, other than a lot of marching! Berkay spent the whole week practicing for it. It was at 9am and lasted for about one and a half hours, there were well over 500 men taking part, all completing their basic training and swearing into the army for the remaining 11 months.

Straight after the ceremony, Berkay got to see his family. I’d asked his brother to send me a few photos via Facebook…  It was so strange seeing him in his uniform, although he looked very proud to be wearing it. I was so thankful I finally had some photos to look at, it helps me picture everyday life there and feel closer to him.

The best part was still yet to come… after Berkay had met up with his family and had a picnic for lunch, he was able to borrow his uncle’s phone to skype me! Seeing him face to face (well… video to video) was surreal, after 3 weeks of not seeing his face at all. It was lovely, and really cheered us both up, thank God for modern technology. He spent 4 hours with his family and then skype called me again on his way back to the army base. His brother took this brilliant photo of Berkay and his stepmum waving to me through the phone camera, I think it’s adorable, look at his big grin! It’s hard for me not seeing him, but it must be 100 times harder for him, at least I have Facebook and photos to look back on, he has nothing. In fact, he gave me the address of the base so that I can send some photos for him to keep, I said I’d send him some chocolate and sweets but he said all he wanted was a few photos of us and our dog. Bless him. I think he’s finding it tougher than he lets on.

Since basic training is now over, some people have moved on to their permanent base, but Berkay is staying another month in Izmir along with all the other people learning the same job as him. Now that training is over they have a tiny bit more freedom, in that they have a day off each week to leave the base and have some free time. Berkay’s day off was Saturday this week, and the first thing he done was head to the nearest internet cafe so that we could have another skype webcam chat!

Again, it was so, so weird seeing him face to face, but lovely. I didn’t know what to say to be honest, it was like I had to fit 3 weeks worth of information into one conversation. Sure, he has managed to call me on the phone everyday so far, but there’s only so much chat you can fit into a one minute phone call. Anyway, after a couple of minutes, we soon found things to talk about and the conversation ended up lasting for half an hour. I showed him my countdown jars and explained about the marbles, he had a big grin on his face and thought it was really cute. Then I showed him a photo our friends had sent us of Boncuk, so he knew she was safe and well. “Awww, I really missed her” he said.

Once his time in the internet cafe had ran out, we said bye and he headed off on a train to another part of Izmir to pass some time, I don’t think he really knew what to do with himself, and he has no friends or family nearby so he probably felt quite lonely too, he hasn’t had time to make friends with the locals yet! 3pm came and his name popped up back on Skype, he’d come back for another 20 minute chat before he needed to be back inside the army base for 4pm. This time he looked really fed up, I can’t imagine how horrible it must be knowing that you have to go back inside the base when you’ve had a few hours of freedom and nothing really to look forward to. I guess it’s like a Sunday evening feeling, dreading going back to work on Monday, but on a much larger scale. I suppose that’s the problem with having a few hours off, he remembered what freedom felt like and was releasing what he was missing out on. Soon the time came for him to go back, and we said bye to each others faces for another week.

We had a good chat about army life, and he told me some things that really shocked me. As expected, the officers in the army are very strict, he was telling me how they stand and watch everyone make their beds to the standard required and will test to see if a coin can bounce off it. (You’d think they’d have better things to do with their time, wouldn’t you?) They allow them to have a shower twice a week, although there is a Turkish hammam on site which they can use everyday, if they can cope with the cold water provided. He says each person is expected to know everything about the man in the bunk bed below or above them – their name, parents names, role, holiday dates and exactly where they are at all times. According to Berkay, the food is very nice, and they are fed a lot of meat, but they apparently put pills in the food to stop the men partaking in any ‘funny business’! The biggest concern of mine is that if any one person out of the hundreds there misbehaves (ie, is found sneaking a phone in, drinking alcohol, comes back late from time off or disobeys orders) they sacrifice the freedom of the rest of the men in the base and nobody will be allowed their one day off for that week. I hope that nobody is selfish enough to do that, but I hear so often of people getting caught smuggling in phones etc, so I’m very wary!

Berkay also tells me funny army stories, and I can’t wait to hear more. This morning he told me he was on guard duty for 2 hours last night and that ‘a crazy boy’ kept climbing out of his bunk bed, walking around and having conversations while sleepwalking, so Berkay had to keep putting him back to bed. I couldn’t stop giggling thinking about this. Brilliant. I’m not entirely sure how useful this guy would be as a soldier… not at night anyway!

Time seems to be going slowly, it’s been just under 4 weeks since he went in. Nearly 1 month down, another 11 to go. I’m not sure when he’ll find out where his permanent base will be, but I really hope it’s somewhere as nice as Izmir. Phonecalls everyday and skype in a local internet cafe once a week I can cope with. Fingers crossed it continues!

Berkay, his stepmum and uncle.

← Fethiye – sitting on the dock of the bay…
Pizza in Fethiye… →