This time 4 years ago I was here in Turkey. I had flown here to spend a week with Berkay. Even though we’d only spent a few hours together before, we had been speaking on MSN messenger and via text messages everyday since I’d returned from Turkey in July, when I first met him while on holiday with a friend. Looking back now, it seems like a crazy thing to have done, and was totally out of character for me. I know friends and family were concerned as I’d spent so little time with him and didn’t know him very well, but I was confident and knew it was what I wanted to do – so I did.

It was the first time I’d ever flown alone, but surprisingly I wasn’t worried about that at all! Initally I had planned to stay in the hotel Berkay worked in, but by the time I arrived it was getting ready to close for the season so his boss gave him the week off and we stayed together in a nearby hotel instead.

When I had met him previously he spoke very little English, so there was a language barrier, but through speaking on MSN daily for 3 months, he had improved. It was weird being together in person! We spent the week doing the usual touristy things, boat trips, going to bars and swimming in the hotel pool. Actually I’d say that this was my last real ‘holiday’ as everytime I’ve visited or lived in Turkey since, has been for totally different purposes and a totally different experience. I love how I’m holding roses in one of the photos – how cheesy! He never buys me flowers anymore haha. 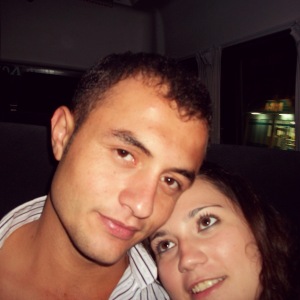 I remember the weather was particularly bad for that week in October, we had a few sunny days but also a lot of rainy days. I remember going for a swim in the hotel pool in the rain, the water was freezing and we had onlookers laughing and cheering us as we jumped in, it was fun! I also remember going on a couple of boat trips and on one of them it was pouring with rain and very cold, they had to pull the plastic sides of the boat down to close up the ‘windows’. They made us all get off at one of the islands with the promise of there being a ‘nice’ restuarant at the top, we all walked up the island, getting soaking wet from the rain, and all we were greeted with at the top was a smashed up, empty, old building – of course they knew all along and it was a joke, but we were cold and wet so it wasn’t very amusing!

Of course Fethiye was as beautiful as ever 4 years ago, look how peaceful it looks. 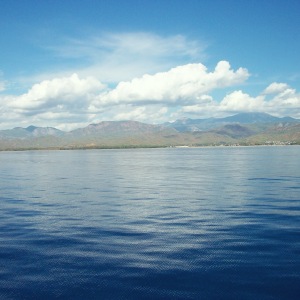 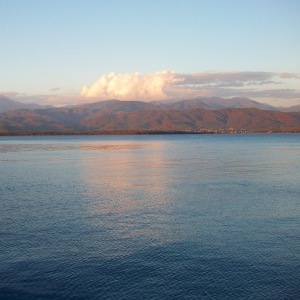 When searching through our old photos, I came across an abundance of cat and dog photos, anyone who knows me knows how much I love animals, so I found that quite funny. I love this photo of Berkay surrounded by little bunny rabbits on one of the islands the boat stopped at. It seems animals are always drawn to us, a cat has currently adopted us and regularly pops by our balcony for dinner.

We look a lot younger in the photos especially Berkay, he has a lot more hair too, he blames me for him going bald… too much stress apparently, haha! I can’t believe it was only 4 years ago, it seems a lot longer, but then again sometimes it feels like it was only yesterday too!