I had no idea what to post today, this ‘bloggin’ everyday’ thing isn’t easy! Wasn’t in the mood to post something really meaningful and we done absolutely nothing other than walk the dog today, so I thought I’d just share some old photos (:

This was my bunny, Abbie. We got her from a pet shop in Fethiye in May 2011 when she was tiny. She was an Albino rabbit and I loved her to bits, she was so funny. She stayed on the balcony in a cage, but we often left the door open so she could hop around. Whenever we were outside eating dinner she’d come hopping over to us for a piece of bread or whatever we were eating, I’m sure she thought she was a dog. If we left our front door open for more than a few minutes she’d dart inside and hide behind the sofa, she knew she wasn’t allowed. She also enjoyed jumping from her cage into the bag of BBQ coals, which often resulted in patches of her white fur ending up black… 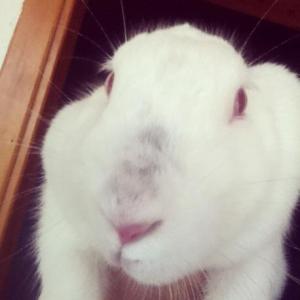 We visited the UK in April and Berkay came back to Turkey two weeks before me, a few days after he got back, she died.. ): A big bird took her from our balcony when her cage door was open and flew off with her somewhere. Berkay went out looking for her and took the dog to try and find her too, unsuccessfully though. I was so sad I didn’t get to say a proper goodbye to her, but at least Berkay had been with her for a few days and I got to see her on FaceTime too.

I remember Berkay saying he thought she might have gotten away from the bird and would come back, and the night after she went, he looked out of the kitchen window and saw something white wandering around near the chickens downstairs so he ran down thinking it was her… but it was just a cat. ):

I used to go out on the balcony every morning at sunrise, as I still do now, and sit and hug her. Poor bunny. I do miss her. 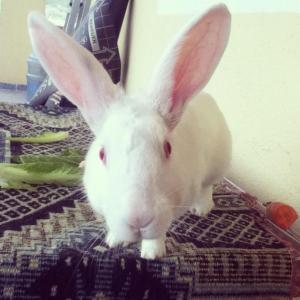 It has resulted in a few cute moments though, I explained to my two year old little sister what had happened (she always used to ask to see my bunny on FaceTime, she still does even now..bless) and this was her reply ”A birdie (H)eat it..poor Dan Dan’s wabbit’‘. I still listen to this video and smile, she did cheer me up!