Well, it was nearly a week ago, but we had a nice Christmas.

Dad was working nights on Christmas eve, so me, Berkay and my step-mum were on ‘constuction duty’ helping Father Christmas build and deliver his presents… We were up til gone 1am helping him.

My very exicted little sister left Father Christmas a mince pie, a cupcake, a glass of milk and a carrot for Rudolph, we tried to convince her to leave a glass of baileys out, but she wasn’t having any of it..

This is what we all woke up to on Christmas morning, Father Christmas even wrapped up the living room doors so no little people could get downstairs into the presents before Dad got home… Little did we know that neither of the ‘little’ people would wake up til gone 9.30!

We all went up to Dad’s room and opened our stockings, me and Berkay had our own ones, which you can tell her was thrilled about! Apparently Father Christmas knows Berkay loves Nandos, as his stocking contained 7 bottles of Nandos sauce!

After crumpets and the traditional Bucks fizz for breakfast, my brother and sister ran through the wrapping paper into the living room and were greeted with presents. It took a good few hours to open them all, my little sister was amazed by it all and wanted to play with everything before opening the next.. I miss being a little kid, but have great fun playing with all her toys myself!

Berkay got me some lovely presents, one being a traditional Turkish cay kettle, and another this Fethiyespor shirt, I wanted one before I left in September but didn’t have a chance to get one, now I can wear it with pride! He also had a skirt specially made for me, I had one similiar before that was my favourite, but it had holes in it and was ruined so he took it to a dress maker and got a new one made, how thoughtful!  Bless. 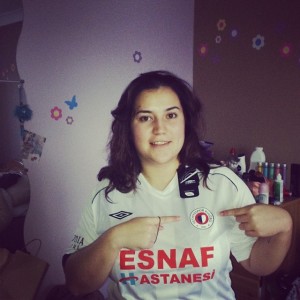 After presents it was dinner time, Berkay tested out one of his new bottles of sauce and ended up using about a quarter of it on his potatoes, he must be the only person in the country who has Nandos hot sauce on their Christmas dinner!! 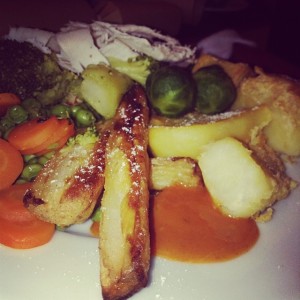 After dinner we went to my step-mum’s Dad’s house for a buffet and a little evening together, poor Berkay didn’t enjoy it very much as pig was pretty much the only thing on the menu, bless him.

Hope you all had a lovely Christmas and a very happy New Year to everyone, we’re off to London tomorrow to watch the fireworks along embankment, wish us luck, I expect we will end up very wet, very cold and very squashed, it’s all part of the fun!!